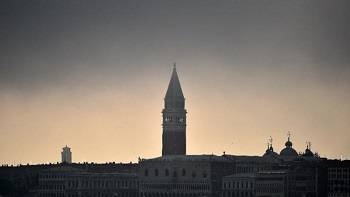 A Swiss-Icelandic artist has launched a mosque installation at an old church as part of the 56th Biennale art fair in the Italian city of Venice, local media reports said Sunday.

According to the artist Christoph Buchel, 48, his installation titled “The Mosque: The First Mosque in the Historic City of Venice” was to promote religious tolerance, local media said.

The installation is placed in the former Catholic church of Santa Maria dell’Abbazia della Misericordia as part of Iceland’s pavilion at the Biennale.

The 10th century church building used for the artwork had been closed for more than 40 years; it was converted into a mosque with Arabic scripts similar to Istanbul’s historical Hagia Sophia Museum. A prayer rug facing Mecca was also placed at the installation.

According to the project’s website, Buchel had prepared his installation in collaboration with the Muslim communities of Venice and Iceland.

The artwork aims to give “attention to the political institutionalization of segregation and prejudice and to settlement policies that lie at the heart of global ethnic and religious conflicts today,” the project’s website elaborated.

Although Venice is home to almost 30 Muslim communities, there is no mosque in the city center.

The head of Association of Muslims in Iceland Ibrahim Sverrir Agnarsson said that he was invited by the Iceland’s Culture Ministry to support the project.

“I knew that the artist had some challenges while preparing this work,” Agnarsson said. “The opening was a big success,” he added.

About the importance of such artworks that draw attention to Islam, Agnarsson said: “This is an art exhibition place and it will serve Muslims.”

“People want to see what Muslims do in mosques, that is all,” he added.

The 56th Venice Biennale will run between May 9 and Nov. 22, allowing visitors and Muslims to visit Venice’s first mosque.

A view of Venice's laguna on May 5, 2015 during the press day of the 56th Venice Biennale (AFP Photo)