Understanding the Rites of ‘Eed Al-Adh-ha - I 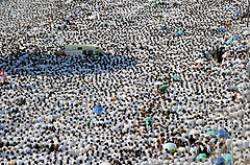 During the first ten days of Thul-Hijjah, the Islamic Ummah lives through great days and virtuous nights that are full of the remembrance of Allah The Almighty and praising Him.

Pilgrims go to Makkah individually and in groups from all over the world by air, sea and land. They represent a great scene of servitude to Allah The Almighty as pilgrims ask for the Mercy and Forgiveness of Allah The Almighty, remember and invoke Him while admitting their humiliation, inability, poverty and need of Him. They attribute all meanings of power, dignity, wealth and exaltation to Allah Alone.

The day of 'Eed Al-Adh-ha is a great day, in fact, the best day of the year when all Muslims share happiness and pleasure; remember Allah and glorify Him, then pray and slaughter their sacrifice in order to thank Allah The Almighty for His blessings.

‘Eed is a time of joy and happiness and we, as Muslims, feel happy when we complete the acts of obedience and gain the Reward and Forgiveness of Allah. Allah The Almighty Says (what means): {Say, "In the Bounty of Allah and in His Mercy - in that let them rejoice;” it is better than what they accumulate.} [Quran 10:58]

said, “The day of Nahr (the 10th day of Thul-Hijjah) is the Day of ‘Eed and it is the day of the greater Hajj and the day Allah The Almighty and His Messenger declared their dissociation from every polytheist.” The Prophet

said: “The best day in the sight of Allah is the Day of Nahr and the day of staying at Mina (the eleventh of Thul-Hijjah).”

During these blessed days it is permissible for you to perform general Takbeer at any time from the beginning of Thul-Hijjah until the end of the Days of Tashreeq. Restricted Takbeer should be recited after the obligatory prayers; from the Fajr Prayer on the Day of ‘Arafah up till the ‘Asr Prayer of the last day of Tashreeq. Hence, try to participate in reviving this Sunnah that has been abandoned these days and most people have forgotten it, even the righteous ones, and this contradicts the deeds of our righteous predecessors.

You should know that thanking Allah The Almighty for His blessings is achieved through obeying Him, not by committing sins, so use your time in performing acts of obedience such as remembering Allah, maintaining kinship ties, forgiving those who treat you badly, avoiding sins whether in the way that you are dressed or by listening to music and the like. It is through thanking Allah that blessings are maintained.

Be keen to attend the ‘Eed Prayer and listen to the Khutbah without exposing your beauty and do not eat until you return home and eat from your sacrifice.

You should know that it is prohibited to fast on the Day of ‘Eed and that there is no specific prayer or Quranic recitation recommended for the night before 'Eed.

It is favorable to provide more food, drinks and clothing for one’s family without extravagance.

The ‘Eed sacrifice is one of the rites of Islam and it is a great act of worship that Allah The Almighty mentioned along with the prayer. The Sunnah (tradition) of the Prophet

clarified its virtue and showed that the Prophet

The ‘Eed sacrifice is an animal that is slaughtered on the days of ‘Eed Al-Adh-ha to gain the pleasure of Allah The Almighty.

Allah The Almighty Says (what means):

- {And for all religion We Have Appointed a rite [of sacrifice] that they may mention the Name of Allah over what He Has Provided for them of [sacrificial] animals. For your god is one God, so to Him submit. And, [O Muhammad], give good tidings to the humble [before their Lord]} [Quran 22:34]

It was narrated on the authority of Anas ibn Maalik

that he said, “The Prophet

slaughtered (sacrificed) two horned rams, black and white in color, and he slaughtered them with his own hands, mentioned the Name of Allah (saying Bismillaah), said Takbeer (Allahu-Akbar), and placed his foot on their sides (while slaughtering them).” [Al-Bukhari and Muslim]

stayed in Madeenah for ten years during which he used to slaughter a sacrifice every year.” Slaughtering a sacrifice is a confirmed act of the Sunnah and it is unfavorable to abandon it if the person can afford it.

Slaughtering a sacrifice is better than giving its price in charity. Ibn Al-Qayyim

used to do. This is in contrast to what some common people think, as they think that sacrifice is for the dead people only.