Guide to Performing 'Umrah – I 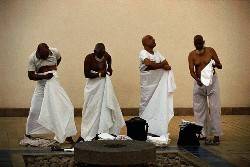 said: “From one ‘Umrah to another is an expiation for the sins committed between them, and the complete and perfect Hajj has no less a reward than Paradise.” [Al-Bukhari and Muslim]

The following points summarize the correct way to perform ‘Umrah:

First: As one arrives at the Meeqaat (i.e., designated places where pilgrims assume Ihraam), he should assume Ihraam (sacral state) by bathing and applying perfume to his body, not to the clothes of Ihraam. If some of the perfume inadvertently rubs off on the clothes, then it should be washed off. For men, it is preferable to wear two clean, white pieces of cloth and to take off all tailored and sewn clothes. Women may wear anything they like, as long as it is in accordance with Islamic regulations. One may wear a ring, a watch, sun glasses or a belt. If it is difficult to stop at the Meeqaat, as is the case of people who travel by air, then the pilgrims should bathe at home, and assume Ihraam when they are parallel to the Meeqaat, saying, “Labbayka Allahumma ‘Umrah (O Allah! In response to your call I perform ‘Umrah).”

If one is afraid that something could prevent the completion of the rituals, then he should make his Ihraam conditional, by saying, “In habasani haabisoon fa mahilli haythu habastani” (O Allah! My Ihraam will terminate at the point where You prevent me).” Therefore, if anything were to happen to prevent one from completing the rituals, then one would come out of the state of Ihraam without facing any penalty.

It is important for the pilgrim to note that:

* Some women mistakenly think that their Ihraam clothes should be of a certain colour, such as white or green, and this is incorrect.

* Collective Talbiyah was never the practice of the Prophet

* It is permissible for men or women to replace the garments of Ihraam with other garments of like nature.

* One should always make sure that his ‘Awrah (area of the body which should Islamically be covered) is covered while sitting down or sleeping.

* Some women believe they may uncover their faces in front of men as long as they are in the state of Ihraam, which is wrong. Women should cover their faces according to the following evidences:

said, "Whenever men used to pass next to us while with the Prophet

in the state of Ihraam, we used to draw down our veils on our faces, and uncover when they were gone.” [Ahmad and Abu Daawood]

said, "We used to cover our faces so that men would not see us, and comb our hair while in the state of Ihraam." [Al-Haakim]

The following prohibitions apply until the pilgrim is in Ihraam:

* Shaving or cutting the hair of the head or the body, or removing it by any other method.

* Hunting (does not include fishing).

* Wearing trousers, or other sewn men's clothing which reveal the shape of the body. However, clothing that has been sewn and does not shape the body i.e., belts or shoes is permissible.

* Covering the head with something which directly touches it, like a hat or a turban. One may go under the shade of an umbrella, inside a tent, or under the roofs of cars; he may also carry his belongings on his head as long as he does not intend to cover his head.

* Wearing gloves or any facial cover for women which directly touches the face (unless men are present, then she must draw down a veil on her face).