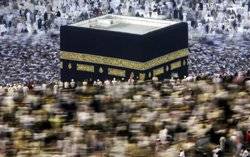 Second: It is Sunnah (Prophetic tradition) to enter the Haram Mosque (or any other Mosque) with the right foot first, whilst saying the following supplication: “Bismillaah, wassalaatu wassalaamu ‘alaa Rasoolillah. Allahumma Ighfir lee waftah lee abwaaba Rahmatik. (In the name of Allah, may Allah send peace upon His Messenger and exalt his mention, O Allah forgive my sins and open your gates of mercy for me).”

Third: Begin Tawaaf, which is to be performed counter-clockwise, starting from the Black Stone or the line that runs parallel to it. It is important that one does this without pushing or harming fellow worshippers. If possible, one should kiss the Black Stone; if this is not possible, then one should touch it with his right hand, or any object such as stick, and then kiss that. If neither of these things are possible, then one should point at the Black Stone, whilst standing on the black line that runs parallel to it, and say, “Allahu Akbar.” This should be done upon each circuit of the Ka’bah, each one starting and ending at the Black Stone or the line that runs parallel to it. Go around seven times, and it is recommended for men to walk quickly during the first three rounds, and this is known as Raml, then walk normally for the remaining four. It is recommended for men only to have their upper garment in the position of Idh-tibaa’, which is to have it wrapped in such a way that the left shoulder is covered and the right shoulder is exposed. This is achieved by wrapping the upper garment under the right armpit. This should only be done in one of two cases: either the Tawaaf of arrival, or for ‘Umrah. Also, one should make plentiful supplication, remembrance and glorification of Allah The Almighty as well as beseeching Him for forgiveness.

The pilgrim should also know that there is no special supplication for each round during Tawaaf. He should also note that:

* Tahaarah (purity) is an essential precondition for the soundness of Tawaaf, according to the opinion of the majority of scholars, so if you nullify your Wudoo’ (ablution) during Tawaaf, you need to leave and perform Wudoo’ and repeat your Tawaaf (from the last round before nullifying it). Ibn 'Abbaas

said, “When Allah revealed the verse (what means): {Our Lord! Punish us not if we forget or fall into error.} Allah The Almighty said: ‘I did.’” [Muslim]

* If the Iqaamah was called whilst in Tawaaf, or a prayer on the dead was called for, the pilgrim must pray with the congregation and resume from the place where they stopped. The pilgrim should not forget to cover their shoulders during prayer, because this compulsory during prayer.

* There is no harm in sitting and taking a rest for a short while during Tawaaf, or drinking water, and moving between floors in the Haram.

* If the pilgrim doubts the number of rounds of Tawaaf they have finished, they should base their judgment on the number they are certain of. For example, if you doubted whether you circumambulated three or four times, make the count three and finish the remaining four, but if you thought and remembered the number for sure, then you may act upon what you are certain of.

* Some people remain in the state of Idh-tibaa’ from the time they wear their Ihraam until they finish the entire ‘Umrah, and this is wrong, because one is supposed to do this only during certain types of Tawaaf as mentioned above.