The Purposes of the Sharee'ah in Hajj 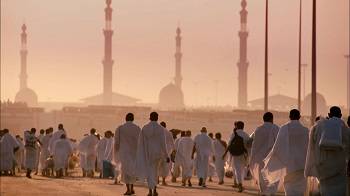 Allah Almighty did not create us in vain and will not neglect us. Rather, He created us to inhabit the earth and achieve succession on it. This, however, will not be realized unless we become the best Ummah (nation) brought to mankind, and this necessitates purifying the self, which is a persistent enjoiner of evil. The only means to purify the self is to apply the teachings of Islam, fulfill its pillars as we learnt them from the Prophet

and be keen to dedicate all our righteous deeds solely for the Sake of Allah. Allah Almighty Says (what means): {…Indeed, prayer prohibits immorality and wrongdoing, and the remembrance of Allah is greater. And Allah knows that which you do….} [Quran 29:45]

In a Hadeeth, the Prophet

said: "Whose prayer does not forbid him from doing immorality and evil, he gets nothing but going further from Allah." Regarding the pillar of fasting, the Prophet

said: "How many people are fasting and receive no reward but the suffering of hunger and thirst."

This means that fasting and prayer do not benefit the servant when he goes to extremes in committing immorality and harming Muslims. When the Prophet

was asked about a woman who used to intensively fast and pray but used to harm her neighbors, he judged her to be among the dwellers of Hell.

There are neither sexual relations nor disobedience:

Allah Almighty Says (what means): {Hajj is [during] well-known months, so whoever has made Hajj obligatory upon himself therein [by entering the state of ihram (state of ritual consecration)], there is [to be for him] no sexual relations and no disobedience and no disputing during Hajj….} [Quran 2:197]

said: "Whoever performs a Hajj during which he neither commits sexual intercourse nor disobedience will return as sinless as a newborn on the day that his mother delivered him." [Al-Bukhari]

mentioned that from the etiquettes of Hajj is that one should treat his companions kindly. The leader should gently treat those who are with him and do what is beneficial for them. The travelers should say good words to each other, provide food, and show the best morals.

Allah Almighty Says (what means) concerning Zakah: {Take [O, Muhammad] from their wealth a charity by which you purify them and cause them increase, and invoke [Allah's blessings] upon them. Indeed, your invocations are reassurance for them. And Allah is Hearing and Knowing.} [Quran 9:103]

The sublime purpose and supreme request is purifying the self and refining the soul and the senses. For the pillars of Islam to be accepted, it is a prerequisite that the Muslim fears Allah, wishes all goodness for the servants of Allah, and avoids harming his fellow Muslims in any way. There are many of those who pray and receive no benefit of their prayer; rather, they obtain nothing but tiredness since their prayer does not forbid them from doing evil and committing misdeeds.

The best and most beloved righteous deeds:

In a Marfoo‘ Hadeeth that was narrated by ‘Umar

it was mentioned that: "The best deed is to make a believer happy by clothing him (to cover his ‘Awrah), satisfying his hunger or fulfilling his need." [At-Tabaraani]

It was also narrated on the authority of Ibn ‘Abbaas

said: "The most beloved deed to Allah Almighty, next to the obligatory acts of worship, is to make a Muslim happy." [At-Tabaraani]

It was narrated on the authority of Al-Hasan ibn ‘Ali

said: "One of the causes of winning the forgiveness (of Allah) is to make your Muslim brother happy." [At-Tabaraani]

Reflecting on these Ahadeeth (narrations), one realizes that the common idea is to highlight the moral aspect, which aims at the unity of Muslims and at discarding whatever leads to dispute and rancor. The Prophet

considered it one of the best forms of Jihaad that a Muslim spares the people his evil. It was narrated on the authority of Abu Sa‘eed Al-Khudri

that a man came to the Prophet

and said: "O Messenger of Allah! Who is the best of mankind?" The Prophet

replied: "A believer who performs Jihaad with his life and property for the Sake of Allah." "Who is next?" the enquirer asked again. The Prophet

said: "It is he who saves the people from his evil." [Al-Bukhari, Muslim and Al-Haakim (with slight differences in wording)]

It is as if Allah, the Creator, has put this slogan for the Muslims in order for them to be guided therewith in their transactions. It is my advice to you to fear Allah regarding your beloved brothers in religion and creed.

Hajj is one of the greatest rituals of the great religion of Islam. Allah Almighty has prescribed it in order to purify His servants from all sins and misdeeds as well as the seduction and filth of the worldly life. The obligation of Hajj is in fact a response to a great and wise divine call. Allah Almighty Says (what means): {And proclaim to the people the Hajj [pilgrimage]; they will come to you on foot and on every lean camel; they will come from every distant pass.} [Quran 22:27] This call has to be honored and respected. Allah Almighty Says (what means): {That [is so]. And whoever honors the symbols of Allah—indeed, it is from the piety of hearts.} [Quran 22:32]

Reflecting on the verses, one observes that piety and purification of the soul is the most important relation between all acts of worship.

There is no disputing in Hajj:

An aspect of honoring this great obligation is to perform it as Allah Almighty wants, hoping that He will accept it. Also, one is required to avoid whatever renders it invalid or makes its reward imperfect. Allah Almighty Says (what means): {Hajj is [during] well-known months, so whoever has made Hajj obligatory upon himself therein [by entering the state of ihram (ritual state of consecration)], there is [to be for him] no sexual relations and no disobedience and no disputing during Hajj….} [Quran 2:197]

There is no disputing either during or after the Hajj. The Muslim enjoys a pure soul and heart and likes for his fellow Muslim whatever he likes for himself. Moreover, he grieves when his Muslim brother is hurt, even because of a thorn, or is afflicted with a disaster. On the other hand, he is prone to seek revenge, abuse the honor of his brother, lie to him, and deceive him. Astonishingly, you see some Muslims who are very modest in words and deeds but when one of them is tried, he proves that he is very far from faith and the fear of Allah. He forgets that Muslims, and all other people, will return to Allah, the Creator, the Supreme Judge and the Ever-Just, and nothing is hidden in the earth or in the heavens from Him.

The Muslim, whether he is a pilgrim or not, should avoid the sins of backbiting, tale bearing, telling lies, cheating, deceiving, arguing, disputing, and quarrelling. Allah Almighty forbids that a Muslim is violated in any way, for this is likely to raise evil and plant enmity and hatred among Muslims. Qataadah

The obligation performed once in a lifetime—Hajj, which is performed during numbered days—is a test for the Muslims. Will they be patient to avoid evil during and after Hajj? Whoever has a good soul and a truthful intention, Allah will help him, strengthen his morale, and boost his determination. Allah Almighty Says (what means): {And those who strive for Us—We will surely guide them to Our ways. And indeed, Allah is with the doers of good.} [Quran 29:69]

All acts of worship, whether they are daily or annual, constitute a school. Hajj is the obligation required once in a lifetime. It is a school that teaches us how to purify ourselves during and after these numbered days and until we meet Allah Almighty.

We should perform the rituals of Hajj with a spirit of brotherhood, unity, and collaboration. We should act like one body and seek one goal while our hearts are full of the ember of faith that filled the hearts of the Companions of the Prophet

. We should follow the example of our righteous predecessors in loving each other, seeking excuses for each other, and treating each other in a way that pleases Allah Almighty.

who was a tearful, devoted worshiper, accompanied a rich merchant during the Hajj journey. When it was the day of travel, Buhaym

kept weeping until his tears fell to the ground and said: "This journey reminds me of my journey to Allah." Then he engaged in loud weeping, a matter that annoyed his Companion, the merchant. After returning from the Hajj, a man came to visit them. He started with the merchant and asked him about his status with Buhaym

greeted him, and then asked him about the status of the merchant during the journey. Buhaym

answered: "He was the best Companion. He remembered Allah often, recited the Quran for long periods of time, quickly engaged in weeping, and endured the faults of his Companion. May Allah reward him whit what is good for this."

Lessons of the Ten Days of Thul-Hijjah

The Conference Legislated by Allah