Was Muhammad the author of the Quran? 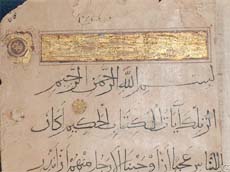 (may Allah exalt his mention). Any historian, Muslim or non-Muslim would argue that the only possible source of the Quran could be the Prophet Mohammad

the man responsible for reciting, teaching, and explaining it to the people of . This has led some thinkers and Orientalists to conclude that the Prophet

must have written the Quran.

Those who believe that Prophet Muhammad

was the author of the Quran are absolutely wrong. However, merely saying that they are incorrect is not enough, without providing proofs. If we contemplate the nature of this glorious book (the Quran) and the capabilities of the Prophet

we will realize that these claims are illogical and groundless.

was unlettered. How can an illiterate person come up with such a rich, intellectual, and inspiring text that gained acceptance not only in but also throughout the world?

never went to school! No one taught him.  He had no teacher of any kind in any specific subject. How could he acquire the knowledge of Science, astronomy, oceanography, etc. that is contained in the Quran? (For example, the mention of ocean currents, stars, earth, moon, sun and their fixed paths in Chapter Ar-Rahmaan; and many other scientific statements that are found in the Quran, that cannot be stated in this short article)

When the Quran was revealed, the Arabic language was at its peak in richness of expression and literature. The Quran came and challenged the best Arabic literature and poetry of that time.

being illiterate, could not possibly have come up with something so miraculously immaculate that it even exceeded the best of poetry and Arabic literature at the time of the language's peak development.

had no reason to come up with something like the Quran, and cause the entire society of to become his enemy. Why would he do something like that?  Why would he formulate something that went against almost all the norms of society, and lose his family, relatives, friends and other loved ones -- not to mention his wealth and reputation?

The Quran was revealed over a period of 23 years -- a very long time!  Is it possible for someone to maintain the same exact style of speech, as demonstrated in the Quran, for over 23 years?

Moreover, the sayings of Prophet Mohammad

are recorded in what Muslims call his ‘Ahadeeth’ (narrations).  If we look at the style of the Hadeeth, and compare it with the style of the Quran, we can clearly see that they are different and distinguishable styles of speech.  The Prophet

spoke publicly -- it does not make sense that a man has two unique, distinguishable and completely different styles of speech in public.  This is another reason why Prophet Mohammad

could not possibly have written the Quran.

Maryam (Mary) in the Quran

The Quran says (what means): "And (mention) when the angels said: ‘O Mary, indeed Allah has chosen you and purified you and Chosen you above the women of all nations.’" [Quran 3: 42]

"Chosen you above the women of all nations" -- even the Bible does not mention such an honor accorded to Mary!

Knowing full-well, and believing as we do, that the whole Quran is the actual Word of God, we will nevertheless agree, for the sake of argument, with the enemies of Prophet Muhammad

for a moment, that he wrote it.

Ask the one who claims this: "Do you have any qualms in agreeing that Prophet Muhammad

"This Arab, in the first instance, was addressing other Arabs. He was not talking to Indian Muslims, Chinese Muslims, or Nigerian Muslims. He was addressing his own people -- the Arabs. Whether they agreed with him or not, he told them in the most sublime form -- words that were seared into the hearts and minds of his listeners, that Maryam (Mary) the mother of Jesus -- a Jewish woman -- was chosen above the women of all nations. Not his own mother, nor his wife, nor his daughter, nor any other Arab woman, but a Jewish woman. Can one explain this? It would seem that any person would place his own mother, wife, or daughter before other women if given a position of authority.

Will anyone please explain the anomaly as to why Muhammad

(if he is the author) chose Mary for such honor? The answer is simple -- he had no choice -- he had no right to speak of his own desire. The Quran says (what means): "It is not but an inspiration sent down to him." [Quran 53:4]

Chapter 19 in the Holy Quran, is named Soorah Maryam, in honor of Mary, the mother of Jesus, may Allah exalt his mention. Such an honor to Mary is not to be found even in the Bible.

was the author of the Holy Quran, then he would not have failed to include in it with Maryam (Mary), the mother of ‘Eesaa (Jesus), may Allah exalt his mention, his own mother Aaminah and his beloved wife, Khadeejah or his daughter, Faatimah, may Allah be pleased with them. But this was not the case , simply because the Quran is not his handiwork!

Future events in the Quran

Islam is based on faith and it is a religion supported by miracles, and one of the miracles granted to the Prophet

was the knowledge of some of the future events which he attained through revelation. The holy Quran has these signs and much more.

For example, predicting the destruction of the Persian Empire at a time when the latter had a monumental victory over . If the Prophet

wrote the Quran, as some people claim, then he would have put his future in real jeopardy by making such a prediction. Neither satellite photos nor on-ground intelligence personnel were available to him at the time of revelation, yet later this prophecy came true.

Moreover, numerous details about many natural phenomena were detailed in the Quran, that were recently proven by experts to be amazingly accurate. For example, the physical development of the fetus inside the womb, along with the timing given by many verses, matches exactly what leading authorities in Embryology are claiming to be recent discoveries.

From the above, it is reasonable to conclude that the Quran is not the creation of the Prophet

. He had no way of predicting these events with such precision, especially when knowing that the Prophet