The significance of hijab 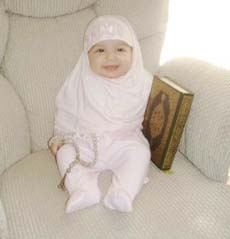 It often occurs to me that many of our sisters in Islam are not correctly enlightened or encouraged once they begin to observe the requirements of Hijab (Islamic women's dress). It may be that a sister has been obliged to wear the Hijab without truly pondering over its superiority and uniqueness.

Perhaps she has reached the age of puberty and her parents have instructed her to wear it. Perhaps she has recently accepted Islam and her close companions have told her of its obligation, or perhaps her husband has commanded her to wear it.
A sister who does not truly know the superiority of Hijab will always remain envious of disbelieving women. Why? Because they observe these misguided disbelievers attempting to look beautiful for all to see. Hence, the Muslim woman then compares herself to that woman, which causes her to feel ashamed of her own Hijab.
Therefore, what follows is a reminder for my sisters in Islam. It is a reminder of the true status of these so-called beautiful women. It is a reminder of the excellence of the women who wear Hijab.
Excellent qualities of those who wear hijab:
It is well known that the Muslim woman is a creature of modesty. Allah loves for our Muslim women to be shielded by their Hijab. It is their outer protection from the decadence of this life. Allah’s Messenger

said: “Allah is modest and covering. He loves modesty and privacy.” [Ahmad and Others]
Thus, as modesty is a quality that is loved by Allah, our sisters must take comfort in knowing that they are modest and not like those women who show themselves off to the world. Such women will not be shielded from Allah’s wrath. Allah’s Messenger

said: “Any woman who takes off her clothes in other than her husband’s home, has broken Allah’s shield upon her.”[Abu Dawood and At-Tirmithi[
Therefore, we see that the Hijab of the Muslim woman is indeed part of modesty. Modesty accompanies Eeman (faith); this is why the Messenger of Allah

said: “Modesty is part of Eeman and Eeman is in Paradise.” [At-Tirmithi] Also: “Modesty and Eeman are (intimate) companions: when one departs, so does the other.” [Al-Hakim and Others]
The Muslim woman must know that the disbelieving women who beautify themselves for the whole world to see possess no modesty; thus, they are void of any Eeman. Instead of looking to the latest fashion models for guidance, she should look to the wives of the Prophet

.
Look at the regard for modesty that our mother, ‘Aa’ishah

possessed, even in the presence of the deceased; she said: “I used to enter the room where the Messenger of Allah

and my father, Abu Bakr, were buried without wearing my (outer) garment, saying that it was only my husband and my father. But when ‘Umar bin Al-Khattab was later buried (in the same place), I did not enter the room except that I had my outer garment on, due to being shy of ‘Umar.”
It could be quite difficult for the Muslim woman to go out wearing Hijab in a society that mocks and torments her. She would certainly feel strange and incongruous. However, if she realises the status of those who are mocked by the disbelievers, then she would continue to wear her Hijab with dignity.
Allah Says in His Book (what means): “Indeed, those who committed crimes used to laugh at those who believed. And when they passed by them, they would exchange derisive glances. And when they returned to their people, they would return jesting. And when they saw them, they would say: 'Indeed, those are truly lost.' But they have not been sent as guardians over them. So Today [i.e., the Day of Judgement] those who believed are laughing at the disbelievers, on adorned couches, observing. Have the disbelievers [not] been rewarded [this Day] for what they used to do?” [Quran: 83:29-36]
These words of Allah should serve as a support for you, my dear sister. Also, take comfort in being a stranger among these lewd and sinful women. Allah’s Messenger

said: “Islam began as something strange, and it will revert to (its old position of) being strange, so good news is for the strangers.” [Muslim]
The characteristic of the exposed:
Instead of wearing the Hijab (covering), the disbelieving women expose themselves, making a dazzling display of themselves for others. Such a display is an attribute of ignorance. Allah Says in His Book (what means): “And abide in your houses and do not display yourselves as [was] the display of the former times of ignorance…”[Quran 33:33]
Allah’s Messenger

said: “The best of your women are the affectionate, the fertile, the comforting, and the agreeable – if they fear Allah. The most evil of your women are those who expose and display themselves, and those who strut (to show off), and they are the hypocrites. Those who enter Paradise are like the red beaked crow.” [Al-Bayhaqi] The mentioning of this kind of crow is to highlight that those who enter Paradise will be as rare as this kind of crow.
We see from the above verse and Hadeeth (prophetic statement) that it is certainly unlawful for a Muslim woman to make a display of herself. Further, it is a quality of the most evil of women. Therefore, do not be envious of the disbelieving women. They only have this life to enjoy, while the believing women will have Paradise. There is nothing in your Hijab to be ashamed of as it is the garment of the righteous and pious female worshippers of Allah.
In order to truly show how evil those women who expose themselves are, let us ponder over the following statement of Allah’s Messenger

: “Of the people of Hell, there are two types that I have never seen; the first are those holding whips like the tail of an ox with which they flog people. The second are women who would be naked despite being dressed (i.e. either partly dressed or wearing translucent clothes), who are seduced and who seduce others. Their hair is high like the humps of a camel. These women will not enter Paradise, nor will they smell its fragrance, although its fragrance can be smelled from such and such a (very far) distance.”[Muslim]
These women who expose themselves are common among us today. These are women that even the Prophet

did not see! Look around you and you will see those women who are clothed but naked! Look at the hair styles of the women who expose themselves – are they not high like a camel’s hump?
Perhaps we are the first generation since the time of Adam

to witness such women. If one ponders over photographs taken thirty to fifty years ago, he will see that the disbelieving women did not expose themselves in the manner that their offspring do today! These women are among the people of the Fire! Thus, how can you envy them?
Therefore, the Muslim men should not let the people of the Fire affect the modesty of their wives, daughters and sisters. Such lewd women will not even smell the fragrance of Paradise, so our women must avoid their path.
Another lesson from the above Hadeeth is that it confirms that what the Prophet

came with is indeed the truth! This is a prophecy that has come to pass in front of our very eyes. Hence, will we continue to envy these evil women, or should we be grateful to our Lord for the Hijab, which brings modesty which leads to Paradise?
On the whole, the Muslim woman should abandon all of the ways of the exposed, and adopt the ways of those who are modest through their love and practice of the proper Islamic Hijab.

Improper dress for women and intermingling between sexes

Allah The Almighty has created man in the best shape and form; He says (what means): · {He Created the heavens and earth in truth and Formed you and perfected your forms; and to Him is...More