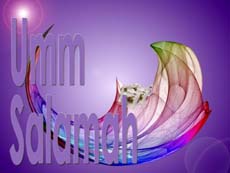 Her widowhood and marriage to the Prophet,

In the third year of Hijrah (Migration of the Prophet

from Makkah to Madeenah), Abu Salamah

fought in the Battle of Uhud. In that historic and crucial battle, his arm was wounded by a poisoned arrow shot by the enemy. He

later recovered after treatment, but could survive only for a few months. His wound relapsed and ultimately he

was immensely grief-stricken at the demise of her loving husband. When the Prophet

heard about this, he

went to offer condolences to her

and asked her to have patience and bear the calamity with fortitude.

According to one narration, when the Prophet

after the death of her husband, he

asked her to pray Allah to grant Abu Salamah the lofty rank of the righteous and grant her a better husband than him.

At this, Umm Salamah

after she was widowed, Abu Bakr

sent her a proposal for marriage, which Umm Salamah

was greatly impressed with the courage, which Umm Salamah

displayed in facing the misfortunes and adversities of life. He

consented, and in Shawwal, the 4th year of Hijrah, her marriage to the Noble Prophet, sallallaahu  alayhi wa sallam, took place.

A Historical example of her wisdom

In the 6th Hijrah year, the Prophet

accompanied by his 1,400 companions

accepted these conditions in adherence to the Divine Command instructing him

to do so. Then the Prophet

ordered the Muslims to slaughter animals in sacrifice (indicating the end of the 'Umrah rites). But the Muslims hesitated in offering the sacrifice, which grieved the Prophet

who was with the Prophet

on this journey, heard this and suggested to the Prophet

to offer the sacrifice, shave his head and take off the Ihram. The Prophet

did so acting on her advice. When the companions

saw that the Prophet’s command was irrevocable, they at once sacrificed their animals and shaved their heads.

led a very simple and austere life. She

was a devout worshiper. Every month, she may Allah be pleased with her fasted for three days (other than the fasting of Ramadan). Once, she

wore a necklace, which had a little amount of gold in it. The Prophet

did not like her wearing even this little amount of gold. So Umm Salamah

immediately took it out.

was very generous. She

implored others also to give away in the cause of Allah. Whatever she

would readily give away to a beggar or a needy person.

Once, a few destitute people came to her begging for charity importunately. Umm Salamah, may Alalah be pleased with her, ordered her maid not to send them back empty-handed, and if there was nothing in the houses, she should give them just a few dates.

has narrated 378 Hadeeths of the Prophet

. In moral excellence and nobility of conduct, she ranks, among the Prophet’s wives, next only to 'Aa'ishah

. She, may Allah be pleased with he,r was an excellent reciter of the Quran, and her style was much similar to the Prophet’s. She

After a life filled with faith and righteous deeds, the Mother of the Believers, Umm Salamah may Allah be pleased with her died in the year 61 A.H., aged 84 and the venerable Companion, Abu Hurayrah

led the people in her funeral prayer, after which she

was buried in Al-Baqee' Cemetery in Madeenah.