Beyond Rituals: The Ultimate Goals and Intents of Hajj – I

Allah Almighty Says in the Noble Quran (what means): {And proclaim to the people Hajj [the pilgrimage]; they will come to you on foot and on every lean camel; they will come from every distant pass. That they may witness benefits for themselves and mention the Name of Allah on known days over what He has provided for them of [sacrificial] animals. So eat of them and feed the miserable and poor.} [Quran 22:27-28]

said, in a well-known narration: “… Whoever performs Hajj solely for the Sake of Allah and, in the course of it, abstains from obscenity and disobedience, returns after Hajj as immaculate as a child just born— as free from sin as he was the day his mother gave birth to him ...” [Al-Bukhari and Muslim]

related, "When Islam entered my heart, I went to the Messenger of Allah

and said, ‘Give me your hand so that I may pledge allegiance to you’. The Prophet

spread his hand, but I withdrew mine. He

said. I said, `That Allah will forgive me.' Then the Messenger of Allah

also said: "There is no day on which Allah frees more of His slaves (from the punishment of Hellfire) than the Day of ‘Arafah; He (Almighty) verily draws near on this day, then boasts of pilgrims before the angles, saying: ‘What do they seek...?"' [Muslim]

The preceding Quranic verses and Prophetic narrations describe the tremendous blessings and remarkable rewards Allah bestows upon those who answer His Call to perform Hajj and offer it the way it should be offered.

Some might say, "Why does Hajj, which is obligatory only once in one's lifetime, occupy such a supreme rank among the rituals of Islam?" Posing this question does not imply rejection of Allah's blessings; rather, it is rather animated by a desire to know the reasons behind Hajj's consequential status, in order to make this knowledge a motivation to perform Hajj and do it in the best way possible.

Let's begin by considering the Prophetic narration quoted in the beginning of this article, which entails that Hajj comprises the following four elements:

First, the worship referred to in the narration is Hajj,

Second, the aim of Hajj is seeking Allah's pleasure—sincerity, a condition necessary for the validity of all acts of worship,

Third, invalidators of Hajj are: engaging in sexual acts and committing serious disobedience, and

Forth, the reward for Hajj is: forgiveness of all sins.

Lexically, Hajj in Arabic means a journey, especially one of exalted purpose. In the legal sense, Hajj refers to pilgrimage to the House of Allah, the Ka'bah, in a specific bodily and mental state, and within a specific time frame to perform specific rituals. As such, Hajj is a broad and extensive form of worship that requires one to put together and manage his financial, physical, mental and emotional resources for an extended period of time in which he/she has to perform a large number of deeds of varying religious weights—prerequisites, obligatory and recommended acts, and that requires one to have a reasonable knowledge of what, how and where to do each one of these particular acts. Those who have been to Hajj or studied it attest to how intricate performing Hajj can be.

Yet, performing Hajj rituals in accordance with the Sharee'ah (Islamic Law) is not of much concern in the discussions to follow ahead. Instead, their focus will be the other aspects of Hajj, alluded to in the aforementioned Quranic verses and Prophetic narrations. We shall shed light on some of the significant concepts and meanings Hajj epitomizes; meanings to which many pilgrims are, unfortunately, either oblivious or indifferent, a fact succinctly depicted by the story about the man who remarked out loud as he saw the massive crowds of pilgrims sweeping through the valley of Muzdalifah: "My God! Look at the number of pilgrims!" A wise man who happened to be standing beside him replied, "Nay, the passengers are many, but the pilgrims are few."

On the face of it, Hajj rituals may seem to be mostly physical and financial in nature but when we deeply consider what is being carried out, in any of its stages, we realize that it is these other meanings and objectives (so-called Maqasid or ultimate goals and intents of Sharee'ah) that are being emphasized to the pilgrims, not the rituals themselves. It is true that such ultimate goals as well as the spiritual dimension are essential to all types of worship in Islam, but the variety of the acts forming the Hajj worship and the magnitude of the ultimate goals and meanings implicit in them are far more tremendous—and so is their spiritual impact—than in any other Islamic worship. Here is a brief discussion of some of these ultimate goals.

Ihram: The return to origin

Ihram is the first pillar of Hajj and probably the most powerful form of Islamic worship a Muslim can ever experience. A time when one consciously declares intention to begin the Hajj rites, Ihram is an act through which the pilgrim acknowledges the sacredness and reverence of Hajj and the House of Allah (Ka'bah) and the Sanctuary (Haram) surrounding it by not passing the Meeqat point towards the Ka'bah without being in the state of Ihram. This state denotes that all pilgrims of all social, racial and economic backgrounds remove all apparent signs of these differences, wear the same two pieces of white simple cloth and all declare the same intention and utter the same words of submission to Allah, the One God, loudly asserting, "Labbayka Allahumma Labbayk," believing that they do that in response to Allah's Call pronounced by Prophet Ibraheem

(Abraham) to mankind to submit to Him and come in pilgrimage to His House and Sacred Place.

Avoiding all that is not of concern to one, giving up many desires, permitted and prohibited, diminishing all causes of division and schism, magnifying equality and fairness, and sanctifying life and rights of others, Muslims or none, are some of the main dimensions the acts of Ihram emphasize. In a sense, Ihram does help pilgrims return to the Fitrah, the original state of goodness: loving Allah, loathing all that He forbade, and being in a state of submission to His Commandments and Will. 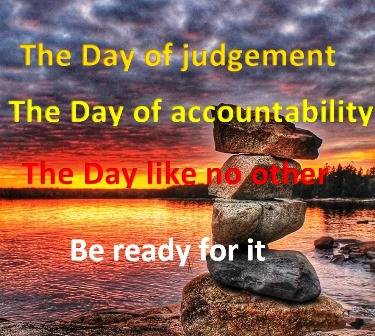