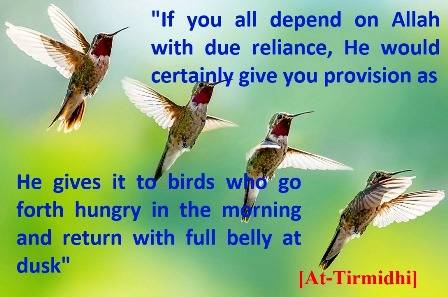 Tawakkul of the bee:

First, let us look at the fascinating life of the bee. Allah Says (what means): "And your Lord inspired to the bee: 'Take for yourself among the mountains, houses, and among the trees and [in] that which they construct. Then eat from all the fruits and follow the ways of your Lord laid down [for you]." There emerges from their bellies a drink, varying in colors, in which there is healing for people. Indeed in that is a sign for a people who give thought." [Quran 16:68-69]

Look at the gigantic work that the bee has to do in order to produce its honey: The bee finds out the most inaccessible places, in the hills, in the trees, and even among the habitation of men. It assimilates the juice of various kinds of flowers and fruit, and forms within its body the honey which it stores in its cells of wax. The different kinds of food from which it makes its honey give different colors to the honey. Now could not Allah provide for the bees their sustenance without them going through all this labor? Of course He Almighty could! Could not Allah create springs and rivers of honey as he created springs and rivers of water? Of course He Almighty could! But by observing the work cycle of the bee and by tasting its sweet and wholesome honey, one can understand and appreciate better the nature and behavior of the bee. A behavior whose ingredients are hard work and complete trust in Allah: And that is the real Tawakkul.

Tawakkul of the birds:

Let us look at another creature of Allah: the bird. Allah Says (what means): "Do they not see the birds above them with wings outspread and [sometimes] folded in? None holds them [aloft] except the Most Merciful. Indeed He is, of all things, Seeing." [Qatar 67:19]
As He did for all of His creatures, our Lord Almighty provided for the birds just those conditions that are best for their lives; He Almighty also inspired them to use their physical shapes and unique movements to take off, fly and land. Thus, in order to fly, birds would have to move their wings upwards and downwards, spread them and fold them.
However, the birds know that the One Who upholds them in the air, is not their upward and downward move, nor the spreading and folding of their wings, but rather Allah Almighty. They have understood that they have to exert effort and rely on Allah alone to uphold them high. As opposed to many rebellious men, birds recognize and exercise total Tawakkul on Allah without giving up the work.
In pursuing this way of life, the birds have become the example to follow for how the Tawakkul should be and how Allah would reward the one who exercises Tawakkul as the birds do.

said: "Were you to put your complete trust in Allah, He would provide for you as He provides for the birds. They issue forth hungry in the morning and return filled in the evening." [At-Tirmithi] Did the birds remain in their nest waiting for Allah's provision? Of course not! Did they claim that since they were engaged in Tasbeeh (praising of Allah), they would not have to strive for their subsistence? Of course not! So praised is Allah Who inspired the birds to set forth to seek provisions for themselves and for their little ones. Praised is He Who taught them Tawakkul so they would not expect provision but from Him.

But a voice cried to her from beneath the palm-tree: "But he called her from below her, "Do not grieve; your Lord has provided beneath you a stream." [Quran 19:24] She knew now that Allah would deliver her from her hunger and thirst and release the pain of her pangs. But the Most High wanted her to initiate an action to benefit from Allah's provisions: "And shake toward you the trunk of the palm tree; it will drop upon you ripe, fresh dates." [Quran 19:25] Now that she fulfilled the physical part of her duties - by shaking the tree, she had to fulfill the spiritual part – relying on Allah for deliverance. Allah's help was prompt: the fresh dates were now falling upon her: "So eat and drink and be contented..."[Quran 19:26]

This is the story of Maryam (Mary), may Allah exalt her mention, whom Allah has destined to be the mother of Prophet 'Eesa (Jesus)

. And when she conceived her baby and entered the pains of childbirth with no one to attend her; when she got hungry and thirsty with no visible help for food and drink; when she became weak and anguished; she was asked to shake a palm-tree for her provision.

A weak, tired, hungry and thirsty woman shaking a strong, deeply rooted palm-tree. Could not Allah send with Jibreel (Angel Gabriel) enough food and drink for her? Could not Allah send down from the heavens a ready-to-eat plate of dates? Or could not Allah say to the dates 'fall upon Mary!', upon which they would? After all, is not Allah the only One Who, when He wills a thing, only says to it, "Be" - and it is? Yes, He Almighty is! But Allah's way is that the effort has to be made, and the reliance has to be complete; the Tawakkul has to be fulfilled.

These were some examples of Allah's creatures putting their trust in Him. The wisest course for us, therefore, is to follow their example. So let us use all lawful means and exert reasonable effort to secure our needs, and let us remain faithful to Allah by putting all our affairs in His Hands and hope and expect for the best outcome. Let us say like the early believers said, as Allah informs us in the Quran Saying (what means): "Say, "He is the Most Merciful; we have believed in Him, and upon Him we have relied…" [Quran 67:29] Allah also Says (what means): "And rely upon Allah; and sufficient is Allah as Disposer of affairs." [Quran 33:3]

At-Tawakkul: Reliance on Allah – I 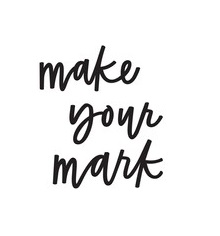 It is a great deprivation and evident loss for a person to be just a number in the long list of humanity during this life and after death, having no weight in the values of moral code and no contribution...More