A Muslim perspective on Christmas -II 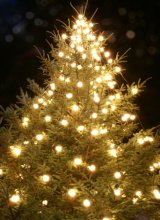 Of course, there is also the problem of the children. They are bombarded with numerous advertisements for toys and are essentially brainwashed so that they should expect something "under the tree" on Christmas Day. One must admit that the brightly lit, multicolored Christmas tree is an attractive sight, made even more tempting when there are numerous wrapped presents underneath it.

To Muslims, each and every thing we do is a part of our worship of the One, Supreme God - nothing is excluded. We do not make any distinction between the secular and the religious. Actually, the English term religion does not convey the all-encompassing nature of the Arabic term Deen. We might be branded as "Fundamentalists," but is there anything else more basic (or "fundamental") than applying our absolute moral code too consistently to everything we do? Isn't that the highest standard?

The basis of our moral code is the Quran, the only intact Revelation, and the strict authenticated observation of those who observed the Prophet Muhammad

known as the Hadeeth. In other words, we Muslims follow the example of the Prophet Muhammad

upon which we base our daily life practices.

Strictly speaking, for Muslims there are two holidays, the two 'Eeds: Namely, 'Eed al-Fitr - the festival of fast-breaking immediately after the end of Ramadan, and 'Eed al-Ad'haa - the festival of sacrifice during the major pilgrimage time. I emphasize that we do not celebrate birthdays (despite all the Western conventions to the contrary) - not even the births of the prophets - including Muhammad, may Allah exalt their mention.

We ask! Do we need to celebrate the winter solstice? Are we afraid that the sun will not come back to us in this cold, dark wintry period? Are the pagan customs of gift giving or the symbols of renewal (such as the evergreens) a necessary reminder for us that spring will come again? Is the materialism in this season, so evident in the West, something worthy of emulation?

The Quran explains the most important things to celebrate. Allah Says (what means): "So be patient over what they say and exalt [Allah] with praise of your Lord before the rising of the sun and before its setting; and during periods of the night [exalt Him] and at the ends of the day, that you may be stisfied. And do not extend your eyes toward that by which We have given enjoyment to [some] categories of them, [its being but] the splendor of worldly life by which We test them. And the provision of your Lord is better and more enduring."  [Quran 20: 130-131]

To Muslims, Jesus, may Allah exalt his mention, is one of a series of prophets [25 of whom are mentioned specifically in the Quran with the final one, or the seal of them, being Muhammad

]. These prophets and messengers were sent to specific groups of people, with the exemption of Muhammad

Many Christian scholars, themselves, would concede that these writings are historically of questionable accuracy and do not represent the views of the early adherents of Jesus, may Allah exalt his mention. In contrast, the Final Revelation, the Quran, is precisely preserved and consists only of the original Arabic text. Unlike the Christian Bibles (and I emphasize the plurality of versions and differences between them), there are no revisions nor are there versions in other languages of the Quran. Simply put, all Muslims have the same original Arabic text as the Quran.

When I was the Director of Da'wah (religious propagation) activities at one of the Islamic centers in Chicago, I had the opportunity of meeting with many visitors to our center, including missionary students from the nearby Billy Graham headquarters in Wheaton, Illinois. Once, one of their students asked one of the Muslims who had come to Friday prayer, "Do you accept the true teachings of Jesus?" His reply (as all knowledgeable Muslims must answer) was "definitely." The student then asked, "Then you accepted that he died for your sins?" The Muslim replied, "Of course not!" He was not trying to ridicule or goad the student on. On the contrary, he was showing respect to the prophet Jesus, may Allah exalt his mention, as we know him from the Quran itself. This can be very frustrating to a Christian, since he may not be aware of the Islamic perspective of the life and role of Jesus, may Allah exalt his mention. I want to emphasize that Muslims deeply respect Jesus, may Allah exalt his mention, and his mother, the Virgin Mary (may Allah be pleased with her), and hold them in high esteem. There is nothing disparaging in this Revelation about them.

. Since Muslims respect them so highly, they naturally do not want to perform any acts, which misrepresent them or their purpose or past life. The Christian beliefs have distorted their roles, thus, we as Muslims cannot condone nor should we participate in those practices. I emphasize, it is not out of disrespect to our Christian colleagues that this is done, rather, it is out of respect and love to Jesus and Mary and God Himself that we must refuse!

In conclusion, I pray that we remember what we are really supposed to celebrate (i.e. the praises of The Supreme God) as stated in the Quran (what means): "Do you not see that Allah is exalted by whomever is within the heavens and the earth and [by] the birds with wings spread [in flight]? Each [of them] has known his [means of] prayer and exalting [Him], and Allah is Knowing of what they do. And to Allah belongs the dominion of the heavens and the earth, and to Allah is the destination." [Quran 24: 41-42]