Our attitude and duties towards New Year's Eve 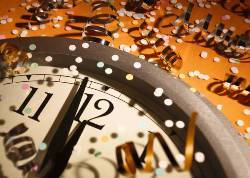 ·        The first day of the Christian year should be regarded as an ordinary day. We should not show any sign of celebration.

·        Everyone should check his family and children lest they celebrate it due to the influence of a friend or a TV channel, or due to a sense of curiosity or imitation. It was narrated on the authority of Ibn ‘Umar, may Allah be pleased with them both, that the Prophet,

said, “It is incumbent upon each of you to dispense justice if one is a ruler and not to be treacherous if he is ruled. Everyone is a caretaker and is responsible for those under his care in the Hereafter. The one who has anyone under his care has to be fair with them, and do what is beneficial for them in terms of religious and worldly matters as well as all relevant things. If he fulfills that, he will receive a great reward. Otherwise, one of those who were under his care may ask him for his rights in the Hereafter.” [Faydh Al-Qadeer]

·        Congratulations and gifts must not be exchanged with either Muslims or non-Muslims who celebrate the night of the birthday of Christ, may Allah exalt his mention.

said, “It is forbidden by unanimous agreement of scholars to congratulate the disbelievers on their specific rites, such as their feasts and fasting, by saying, for example, “Merry Christmas!” or “Happy feast!” and the like. Even if the Muslim who says that does not become a disbeliever for doing so, he has certainly done something that is forbidden. This is equal to congratulating them on prostrating to the cross. It is a greater sin in the sight of Allah The Almighty and more reprehensible than congratulating them on drinking alcohol, committing adultery and the like. Many people who do not practice any religion do that, and they are unaware of the ugliness of their actions.

The one who does that exposes himself to the Wrath of Allah The Almighty if he congratulates someone on a sin, religious innovation or disbelief.

Righteous scholars used to avoid congratulating despots on coming to power and those who were ignorant on assuming the office of a judge, teacher or Mufti  (a scholar who is qualified to issue religious verdicts) to save themselves from the wrath of Allah The Almighty and for fear of losing their status in His sight. If the Muslim congratulates them to avoid the evil he anticipates from them and says nothing but good words and supplicates for their guidance and success, there is no harm in that. Guidance is sought from Allah The Almighty.” [Ahkaam Ahl Ath-Thimmah]

·        It is not permissible to take a holiday from studies, official or private work.

·        It is not permissible to contact live programs over the satellite channels and radio stations to request songs, or send greetings and the like, unless one contacts these stations to disapprove of such acts. It was narrated on the authority of Abu Sa‘eed Al-Khudri, may Allah be pleased with him, that he heard the Messenger of Allah,

·    Muslim merchants should fear Allah The Almighty and not sell anything that helps to depict and contribute to the celebrations of that rite. Ibn Al-Haajj

said, “It is unlawful for the Muslim to sell the Christians meat, food, clothing or to lend them riding animals, because in doing so he will be helping them with their disbelief, something that should be disallowed by Muslim rulers.” [Fataawa Ibn Hajar Al-Haytami]