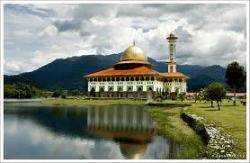 The more you act contrary to the denizens of Hell, the further you are from deeds characteristic of them, and the more distant you are from the punishment of Hellfire.
Anas, may Allah be pleased with him, narrated: “The Messenger of Allah

arrived in Madeenah, where they had a couple of days of celebration. He inquired: ‘What are those two days?’ The people said: ‘We used to enjoy ourselves during them, in the pre-Islamic era.’ At that, the Messenger of Allah

said: ‘Verily, Allah has given you instead of them, two days that are better than them: the day of Al-Adh-ha (the ‘Eed on the tenth of Thul-Hijjah) and of Al-Fitr (the ‘Eed after Ramadan).’” [Abu Daawood]
The obligation and desirability of differentiating from disbelievers
Imitating the disbelievers is forbidden in general and acting contrary to their traditions is prescribed in the Sharee’ah (Islamic jurisprudence), either as an obligation or a recommended act.
An example of where the Prophet,

, rendered such conduct mandatory, is in his statement: "Do the opposite of what the polytheists do: trim the moustaches and let the beards grow." [Muslim] In another Hadeeth, he orders the same differentiation, but only as a recommendation; he says: "Act contrary to the Jews, who pray neither in their sandals nor in their Khuff (leather footwear)." [Abu Daawood]
Hence, doing the opposite of the actions of the disbelievers and the People of the Book is an established principle in itself; and, imitating them is unlawful, whether or not a person intends to resemble them. This is substantiated by the fact that the Prophet,

, forbade Muslims from imitating the disbelievers in their [daily] activities, regardless of their intention, such as when he instructed them not to grow the moustache, which is simply a trend or done out of habit. Yet, he forbade them in order to prevent any conformity, however external, between Muslims and polytheists.
There is a clear wisdom behind that, for said harmony may then exceed the outer aspects and extend internally [to the psyche], as well.
Our guidance is different from theirs
There are two kinds of differentiation from disbelievers: in the origin of the deed and opposition in its methodology.
In terms of [differentiating in] a tradition itself, this would apply to, for instance, holidays of disbelievers; it is not at all valid under the Sharee’ah for Muslims to take part in their festivities.
An example of [acting contrary to them in] the manner of a deed is reflected in the fact that there are certain acts of worship, practiced by both Muslims and non-Muslims, such as fasting on the day of ‘Aashooraa' (tenth of Muharram), prayer and burial. Now, though we may agree with them on the act of worship in principle, the Sharee’ah commands us to perform it in a different way.
So, we were instructed to fast the ninth or eleventh [along with the tenth of Muharram], and, in contradiction to others, to hasten to break our fast as soon as the sun sets and to prolong Suhoor (pre-dawn meal) [until daybreak]. We were also told to sometimes pray with our footwear on, for those of other faiths refrain from that. Furthermore, it was prescribed for us to construct our graves facing the direction of the Ka‘bah, to distinguish them from that of the disbelievers; and, to make them in the form of Lahd, due to his,

, statement: "The Lahd (a grave opened horizontally in the wall of an excavation) is for us [Muslims], and Shaqq (grave dug vertically in the earth] is for the People of the Scripture [i.e., Jews and Christians]." [Ahmad]
All Sharee’ah rules confirm the dire necessity for Muslims to purposefully act contrary to the disbelievers, with regard to their particular customs. This differentiation is further reinforced and becomes even more obligatory when it comes to their special acts of worship. In this respect, the Messenger of Allah,

, said: "Our guidance is different from theirs." [Al-Bayhaqi]
This does not imply that we should refrain from imitating them in what serves the interest of humankind, in terms of what they have surpassed us in, such as science and medicine. What is intended here is that we must not imitate them in their distinctive traditions and beliefs, which not only entail for us no benefit in this life, but actually harm us in the Hereafter. Furthermore, such an act removes the aversion between those of belief and those who reject it, and it sows the seeds of affinity and allegiance between them.
Replacing something with another entails first giving up what is being replaced
If we apply this principle to the imitation of disbelievers, we would say: celebrating their occasions and holidays is not permissible, from two fronts:
Firstly, the Sharee’ah prohibits [any and all] imitation of the People of the Book. The Messenger of Allah,

, said: "Whoever imitates a certain people becomes one of them." [Abu Daawood] He also said: "Do the opposite of what the polytheists do."
We have said that the Sharee’ah forbids Muslims from copying them in appearances, then, how would it be concerning their acts of worship? Certainly, it would be even more prohibited.
The other front lies in the texts that specifically affirm the prohibition of celebrating the holidays of the disbelievers. Here, mention may be made of the verse in which Allah The Almighty Says (what means): {And [they are] those who do not testify to falsehood, and when they pass near ill speech, they pass by with dignity.} [Quran 25:72] It is stated in Tafseer Ibn Katheer, that the [evil mentioned in this] verse refers to pagan festivities, according to Mujaahid and Ar-Rabee‘ ibn Anas

and others from among the righteous predecessors.
Among the texts in support of the prohibition of celebrating disbelievers’ holidays, we can cite the previous Hadeeth narrated by Anas, may Allah be pleased with him, in which the Prophet,

, said: "No doubt, Allah has granted you, instead of them, two days better than them: the day of Al-Adh-ha and of Al-Fitr." [Abu Daawood] Thus, he neither approved of the pre-Islamic holidays [in Madeenah] nor let Muslims celebrate them; rather, he told them that Allah The Almighty had given them two better holidays as a replacement for them. This clearly indicates the impermissibility of celebrating both Muslim and non-Muslim festivities, on the basis of the rule that replacing something with another thing entails giving up the former first. In this sense, it is similar to what is reported will be said to a deceased Muslim in his grave: "Look at your seat in the fire [of Hell]; Allah has granted you, instead of it, another place better than it, in Paradise." [Al-Bukhari] Similarly, Muslims are endowed with two ‘Eeds, of Al-Fitr and Al-Adh-ha, in place of the two pre-Islamic festivals.
What further attests to this practice is that those two pagan festivities disappeared under Islam and no trace of them remained during the lifetime of the Messenger of Allah,

, and his successors. Had the ban not been firmly decisive, they would have still been commemorated. Well-established customs, like festive occasions in which people rejoice, play and eat, can hardly fade, and those in authority may even fail in their attempt to turn people away from them, for the hearts are strongly attached to them. Had the Muslims not understood a clear injunction against them from the Prophet,

, they would have kept celebrating them, even a little. It can then be deduced that the ban and restriction on such festivities was firm.