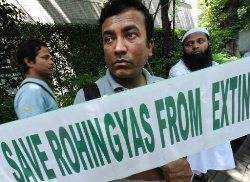 Entering the Rohingya camps along the Bangladesh-Myanmar border is restricted.

Officially they don't even exist, but in reality authorities ‘tolerate’ their presence. Bangladeshi official say there are about 300,000 unregistered Muslim Rohingya refugees from Myanmar living in dismal and squalid conditions with no electricity or drinking water and restricted from access to hospitals or schools. Leaving the camps is prohibited, but many find a way out anyway.

Visitors are not welcome, especially ones with cameras. Police informants are placed inside and out to keep an eye on unauthorized visitors. We managed to sneak in during a sudden spell of heavy monsoon downpour. The rains were a blessing; the police informants ran for cover and we walked unnoticed into the camp. As we climbed up the narrow muddy lanes, an eerie silence hung thick in the air. Behind each improvised tent we passed, we could see the eyes of men, women and children peering out. They were all quiet, as if in hiding. Some were shaking. They were scared.

Last month, sectarian violence between the Rohingya Muslim minority and the Buddhist majority left about 80 dead and many more injured in Myanmar's Rakhine state bordering Bangladesh. The violence was taken as a sign of more to come; thousands tried to flee across the border into Bangladesh and they continue to do so.

Authorities in Bangladesh's capital Dhaka do not see these fleeing Rohingyas as refugees but as illegal asylum seekers, and the country's border guards are under strict order to send them back to where they came from. Still, many make it across.

Huddled in a dark makeshift tent made of mud and plastic sheets, I tried to speak to a group of them. It took time to build trust, to get the conversation going. Their silence speaks much louder than words. Some wept. A 14-year-old girl broke the silence.

She said one word.

The others followed suit. They told us the Myanmar army and police go house to house, abducting men and sexually abusing women. One of the elders described what was happening in his homeland as state sponsored sectarian violence. And it is escalating, he said.

For decades, Muslim Rohingyas have suffered extreme discrimination. Their dark skin and religious difference are a source of deep prejudice amongst Myanmar's Buddhist majority. They are prohibited from owning land, running businesses, practicing their religion or getting married.

Myanmar's move towards ‘democracy’ last year instilled many Rohingya with a new sense of hope. Most are supporters of Aung San Suu Kyi, but she has remained uncomfortably quiet on their plight.

Roughly 29,000 Rohingya are recognized as refugees by the Bangladeshi government and UNHCR. In the eyes of the Bangladesh authorities the 300,000 others don't exist, so they do not receive any UN aid. A handful of aid agencies work with them, but none of them want to be filmed or named.

They say if we film these camps, the Bangladeshi authorities could shut their aid programs down.

Authorities have already refused $33m in UN aid money for the Rohingya and local Bangladeshi community in the area, saying that this would make life too comfortable and may risk attracting more refugees to Bangladesh.

As the downpour turned to a drizzle we made our way out of the camp before the informants showed up.

The monsoon weather kept us safe, before it stopped we had to move. As we hurried out, a group of Rohingyas hurried in, like us, using the rain as the only source of cover.

Members of the Burmese Rohingya Association in Japan (BRAJ) stage a rally calling for rights for Rohingya refugees in front of the Myarnmar embassy in Tokyo on July 9, 2012.