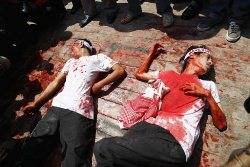 A recent journey to western Myanmar has revealed a provincial capital divided by hatred and thousands of its Muslim residents terrorized by what they say is a state-sponsored campaign to segregate the population along ethno-sectarian lines.
Decades-old tension between ethnic Rakhine Buddhists and Rohingya Muslims in coastal Rakhine state exploded with new ferocity in June, leaving at least 78 people dead and tens of thousands homeless.

Exclusive reporting conducted last week in the highly restricted region suggests that the long-term fallout from recent violence could be even more damaging than the bloodshed.

The United Nations has estimated that 80,000 people are still displaced around the cities of Sittwe and Maungdaw, and international rights groups continue to denounce Myanmar for its role in the conflict.

As it stands, any thought of reconciliation between local Buddhists and Muslims appears a distant dream.

Many Rohingya have fled the polarized region, fearing revenge attacks and increasing discrimination. Their status has sparked international concern and disagreement.

Rights groups have condemned the violence. The Myanmar government has denied any wrongdoing, while neighboring Bangladesh has rejected an influx of refugees and slashed access to aid.

For those Rohingya caught up in the dispute, the day-to-day situation is rapidly slipping from desperate to dire.
Social 'non-engagement'

In Sittwe, the capital of Rakhine state, the scars of recent conflict were everywhere.

Burned homes, shops and entire markets dot the Buddhist-majority city of nearly 200,000 people. Traditionally Muslim neighborhoods, such as Shwe Pyar, Nazi Konetan and Mawlike, were deserted, locked up, or living in deep secrecy.
Prominent mosques and buildings, many of which were burned in arson attacks during the violence, now bear signs from the municipality reading, "No one is allowed to enter." Locals told Al Jazeera the properties have been taken over by the state. In some areas of Sittwe, the devastation from the violence that peaked in June is comparable to Cyclone Nargis, which struck Myanmar in 2008.

Most striking was the almost completely absence of the Rohingya population that once made up nearly one-third of the city's residents, and the largest portion of its working class.

The impact of that loss was obvious. The Rohingya who worked as the city's ever-present ricksaw drivers and porters at the jetty and markets are now gone. There are no signs of Muslims at the airport, the boat shuttles that ferry passengers to outlying islands, or even the local busses that run Buthidaung to Maungdaw, two Rohingya-majority states.
Local Hindus, and residents who appear to be of Indian descent, have taken to applying bindis to their foreheads to avoid being mistaken for Rohingya.

A range of interviews found that Buddhist Rakhines had collectively decided to practice a policy of "non-engagement" with the Rohingya. In practical terms, this meant a ban on businesses, as well as controlling access to food, medicine, travel and communication.

According to local sources, Rohingya are no longer allowed to enter the city's largest market or to travel from town to town.

Outside Sittwe, where the fleeing Rohingya had gathered, the situation was worse. The village of Bhumei, a few kilometers to the west, was overrun by thousands of refugees who said they were forced from the city, first by mobs, then by security troops.

By local accounts, this camp is the biggest of the camps that have sprung up to shelter the displaced city dwellers.
The refugees endured the current monsoon rains in mud-floored tents, living mostly on bags of rice provided by the UN's World Food Program. There is no clinic, proper bathroom or clean water, as witnessed by Al Jazeera.

The camp is surrounded by all hours by security troops. Many wonder if the soldiers are there to protect them from attacks from the Rakhine, or keep them under guard.

"Many of the refugees who fled from inside the city are manual laborers and daily wagers. We are having great difficulties just surviving each day. We fear what will happen to us if we go back to the town. We can't go there yet. Those who risked going back to their homes and shops were prevented by authorities on security grounds," said U Shwe Maung, a Rohingya refugee in Bhumei.

"We are sharing food with each other. We are now facing starvation. Even though we are provided food by the WFP, that is not enough for such a huge number of people like this," he added.

The Rohingya now forced to live in the Bhumei camp appeared desperate. One woman was crying in the street with her rain-soaked children on her lap. She said they were sick and there was no clinic to look after them or food to eat.

"We want to go back to our homes if the officials provide security for us," said Mahmud Shiko, a Rohingya in Bhumei.
"The police told me I'd find nothing back there if I return, but I still want to go back."

HRW also blasted Myanmar's security forces, sent in by the government, for standing down while the Rakhine and Rohingya groups battled each other. As the attacks escalated and thousands of Rohingya rioted, the report said that police and paramilitary trooped fired on Rohingya protesters.

In an outlying area, according to the report, soldiers shot at Rohingya villagers as they tried to escape and looted food and valuables from their emptied homes.

Benjamin Zawacki, a Bangkok-based researcher for Amnesty International, described the violence as "primarily one-sided, with Muslims generally and Rohingya specifically the targets and victims".

HRW says hundreds of men and boys were rounded up in mass arrests, their whereabouts still are unknown. Informal Rohingya estimates put the number of missing and arrested in the thousands.

On the hushed streets of Sittwe and in the tent city outside Bhumei, Rohinyga speak of the brutality of the Rakhine and the Myanmar forces, and of the many loved ones still missing from the conflict.

The alleged victims are not the only combatants talking about the violence.

In a series of interviews with off-duty security officers at bars and restaurants in Sittwe, a picture emerged of what some Myanmar military and police think about the Rohingya.

An ethnic Rakhine soldier from the 352 Light Infantry Battalion claimed he and his comrades killed "300 Rohingya" from Myothugyi village near the area of Three Mile between Buthidaung and Maundaw townships on the night of June 8.

The soldier, whose name has been withheld, explained that the killings took place when hundreds of Muslims blocked and tried to overwhelm the truck carrying his unit. The victims were unaware the truck, a civilian vehicle used for road construction, was carrying soldiers.

"I put the butt of my gun here at [the right side of] my waist and shot down many Muslims while keeping my left hand on magazines so that I could quickly fill up my bullets," said the soldier, now stationed at a village outside Maungdaw.

"There were so many dead bodies that we even had to call in a bulldozer to make a mass grave."

Another ethnic Rakhine soldier boasted that he and his troops killed an uncountable number of Rohingya in the village of Nyaung Chaung in the countryside around Maungdaw during the early June crackdown.

"We have even still kept this from our [commanding] officers," he said.

It was impossible to verify these claims. Even so, the uncaring nature of the statements shows the animosity that some who wield power have for the Rohingya.

An educated Rakhine woman, visiting Maungdaw from the US where she has lived for 20 years, spoke bitterly when asked if the human rights she enjoys should be granted to Rohingya to ease tension between the communities.

"Human rights are for human being only. Are Rohingya humans?" she told Al Jazeera.

"We are the house owners and they are the guests. When the guests attempt to drive out the homeowners, human rights are no longer meant for them."

The Myanmar government has strongly denied accusations of abuse from rights groups.

"The government has exercised maximum restraint in order to restore law and order in those particular places," read a statement released on Monday.

The government also denounced "attempts by some quarters to politicize and internationalize this situation as a religious issue", a sidelong reference to the criticism emerging from Muslim countries, such as Indonesia and Saudi Arabia, over the assaults on Rohingya.

Then again, the government has, over the years, denied the entire existence of a "Rohingya problem", and even the Rohingya themselves.

Myanmar's formerly military government and its state-run media have strictly avoided the word "Rohingya", referring to the group instead as "Bengali Muslims", implying that the people are not indigenous and have migrated to Myanmar recently a few several decades ago. The Myanmar immigration minister has repeatedly said that there are no Rohingyas in Myanmar.

Last month, in his last month meeting with a UN High Commissioner for Refugees delegation, President Thein Sein said refugee camps or deportation was the only answer for nearly the country estimate 800,000 to a million Rohingya Muslims.
"We will take responsibility for our ethnic people but it is impossible to accept the illegally entered Rohingyas, who are not our ethnicity," he told UNHCR chief Antonio Guterres, according to the president's official website.

The former general said the "only solution" was to send the Rohingyas to refugee camps run by UNHCR.

"We will send them away if any third country would accept them. This is what we are thinking is the solution to the issue."

The government, when it does discuss the issue, blames the resentment and fear that the Rakhine have for the Rohingya on a potential population explosion that would see the group seize power.

Outside its capital city, Rakhine state is nearly two-thirds Rohingya. The adjacent states of Maungdaw and Buthidaung are already majority Rohingya, according to official figures.

The population fears, possibly stemming from cultural stereotypes, are an issue that 72-year-old Rohingya elder Sayyad Abdullah can appreciate. He has four wives, 28 children and, in his words, "lots" of grandchildren.

Abdullah rejected any desire for an autonomous state and said he was open to government measure to curb Rohingya families to one wife and two children, but not at the expense of dignity.

"We just desire equal rights like the Rakhine and the Burmese, and we want nothing more than a normal life," he told Al Jazeera.

Other Rohingya leaders say the perception of their community is wrong, and racist. The majority are impoverished farmers and laborers, but some Rohingya hold university degrees and own many businesses in Sittwe and Yangon.

Thein Zaw and Kyaw Hla, who are now overseeing the distribution of food aid at the Bhumei refugee camp, belong to the wealthiest class of Sittwe. They claim their forefathers have lived in Rakhine state for 350 years.

As it stands, the vast majority of Rohingya are denied Myanmar citizenship, cannot own businesses, marry or relocate. The president's proposal to relegate the Rohingya population to UNHCR-run camps seems unsustainable and humiliating.

Whether this long-simmering dispute is founded in race, religion or population, matters little to the Rohingya stuck in camps such as Bhumei.

Some scholars, such as Myanmar expert Bertil Linter, claim the animosity between Rakhine and Rohingya began during the Second World War, when Buddhist backed the Japanese and Muslims the British. Other experts say the rift began centuries before.

In either case, unless the government or international bodies intervene, the violence and discrimination seem destined to continue.

Muslim activists perform as Rohingya victims during a protest outside the Myanmar embassy in Jakarta August 9, 2012.