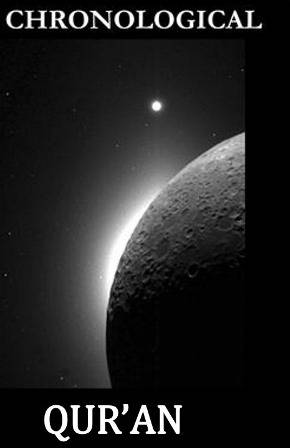 The Quran was revealed in Arabic to the Prophet Mohammad

in 610 CE over 22 years. In the first twelve years of the revelation, the Prophet

was living in Makkah (Mecca). Persecution, at the hands of the tribe of Quraysh then forced him

to leave to Al-Madeenah, in what is known as the Hijrah (immigration), where he lived the last ten years.

The 114 chapters of the Holy Quran are not listed in the chronological order of their revelation. This special order, however, was inspired to the Prophet

by Allah, the Most Exalted, so it is a genuine quality of the Quran. Each chapter is described as either Makkan or Madeenan, depending on whether the majority of its verses were revealed before or after the Hijrah.

Knowing the chronological order in which the different Soorahs (Quranic chapters) or verses were revealed can be of importance in some cases. And even though this may not be possible for all of the 6234 verses, because the sequence was recorded at anytime, through sound Ijtihad (research) and analysis, scholars were capable of putting together the cases where authentic reports confirmed such order and the cases where that order was made clear.

These efforts resulted in the development of a method in which the revelation of the Quran was looked at in chronological terms as well as dividing revelation into Makki (Makkan) and Madani (Madeenah) types or periods.

We will first look at some of the benefits of this chronological analysis, then proceed to discuss the Makki and Madani criteria and their use in the Tafseer (interpretation of the Quran) and the deduction of Fiqh (Islamic jurisprudence) rulings.

In the following we will present a very brief look at three main benefits of the chronological analysis of the Quran, other benefits and many more examples can be found in Al-Itgan, by Imam As-Suyooti

Abrogation is a term that refers to the cases in which a ruling gets abrogated by another. Simply put, abrogation means the replacement of one verse by another thus reversing or repealing the ruling that was revealed in it. Therefore, if we have a case in which we have two verses that carry in them two rulings which oppose one another and we could reconcile them in a way that is acceptable under the Principles of Fiqh (Jurisprudence), then we look at the chronological order of their revelation to assess which verse carries the abrogated ruling. Obviously, the verse revealed first carries the abrogated ruling, and we should uphold the ruling carried in the late-revealed one.

Examples of that: If we knew that:

1. The verses making Salah (prayer) obligatory were revealed in Makkah before the Hijrah [migration of Prophet Muhammad

Appreciation of the Gradual Process in Legislation

This is an important part of the general message of Islam, especially the aspect related to making prohibitions and having people go through major changes of lifestyle. Knowledge of the chronology of how these aspects were made in the early period of Islam leads one to appreciate the wisdom behind the gradual process of legislation. A good example of this is the prohibition of inebriants. First, people were told they are bad but may have some benefit, as in the verse (which means): "They ask you (O Muhammad

Then they were told not to drink before Salah, through the verse (which means): "O you who have believed, do not approach prayer while you are intoxicated ..." [Quran 4:43]

And later inebriants were prohibited altogether, through the verse (which means): "O you who have believed, indeed, intoxicants, gambling, [sacrificing on] stone alters [to other than Allah], and divining arrows are but defilement from the work of Satan, so avoid it that you may be successful. " [Quran 5:90]

In this example we notice the way the legislation considered the fact that drinking was a major solid part of the Arabs' social life. But the gradual approach used in indicating its harms and making it prohibited on them made it easy for them to accept, a realistic approach which we can all learn from.