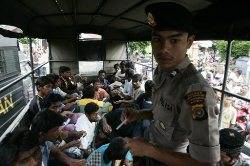 Young men who have found refuge in Malaysia after fleeing violence in Myanmar are covertly getting brides from home.

Shamsul Alam, has dabbled as a tailor's assistant and construction worker since fleeing to Malaysia from his native Rakhine State in Myanmar.

He recalls bitterly his grueling 12-14 hour work days on construction sites before grabbing a quick meal and dashing off to the highlands in the hopes of evading the authorities.

But when he speaks about his intentions to marry, the 30-some year old Rohingya becomes much more poetic: "If a man wants to live, he must have a woman…People need companions to live on this earth."

However, his dream to marry has been difficult. As young Rohingya men like Alam have settled into life in Malaysia, to which a steady trickle of Rohingya refugees has been fleeing, they've been presented with a unique twist on a common dilemma: where to find a suitable bride.

Their perceived low social status has made it particularly difficult to secure brides.

"There's a big gap socially between a Rohingya man and a Malay woman," says Chris Lewa, director of the Arakan Project, an advocacy organization for the Rohingya community. "The father of a Malay woman would not want to give his daughter to a stateless groom."

As a result, the demand for brides is creating a new phenomenon: the Rohingya version of the mail-order bride.

Sending back for a bride

The stateless Rohingya, described by the UN Refugee Agency as the most persecuted minority in the world, face restrictions in their native Myanmar on where they can travel, who they can marry, and how many children they can have.

Of the 30,000 refugees who have fled ethnic violence against Rohingya in their home state for Malaysia, the majority of those braving the treacherous boat journey have been young, single men.

"In the past many Rohingya men in Malaysia married undocumented Indonesian or Burmese Muslim women," Lewa says. "But from 2009 it became more common to send a Rohingya bride from their village by air."

Activists and refuges estimate that hundreds of Rohingya brides have been sent over since 2009, with 67 making the trip last year.

"In our camp there has been many men who went over [to Malaysia] who have since been in touch to say ‘hey, send me a woman to marry'," says Deen Mohammed, a refugee living in Leda camp in Cox's Bazaar in southeast Bangladesh.

So-called brokers and family members back in Myanmar and the refugee camps in Bangladesh look out for potential female mates. Once the right woman is found, several deals are struck.

The suitor - or often his parents - then come to an agreement with the bride-to-be's parents, which can involve monthly payments or a lump-sum figure. The girl herself is rarely consulted.

Arrangements must then be made with the brokers - who then arrange the fake passports, tickets, and other documentation for the girl and her companion who often pose as her husband to get her through the scrutiny of immigration officials.

From sea to the sky

One factor spurring the growth of the number of brides being flown over is the change in Thailand's attitude towards refugee boats.

Having previously turned a blind eye, In 2009, Thailand - a key passage for onward travel to Malaysia - began to push refugee boats back to sea, leaving their passengers vulnerable to risks of dehydration and death. This shift coincided with a boom in low-cost air travel in Asia, with airlines like AirAsia adding hundreds of routes in 2008.

Parents unwilling to risk their daughter's lives by sending them on a small boat seem to be more receptive to the notion of dispatching them by air, opening the door for lonely men like Alam to spend his savings on a bride, a broker, and their plane tickets.

Somewhat ironically, the cost of bringing a bride to Malaysia by boat is now more expensive than by air, according to Deen Mohammed.

He explained, however, that many refugees don't have the luxury of choice.

"Many of the refugees aren't able to make the arrangements to go by plane…Not everyone is able to get a passport and other documents."

Syed Karim, a refugee in Bangladesh who is preparing to send his daughter by boat to get married in Malaysia, is realistic about the situation.

"I just know that I'm supposed send the money I get [from the groom] to a specific place, and then someone will come take her. I don't know who he is, but I know his name," Karim says.

"Of course I'm scared about what might happen to her. She's a single girl by herself, she's 21 years old. She's worried about how she is going to reach her fiancé."

But uncertainty is a hallmark not just of the travel, but also of the life after it.

Mohammed recounted the story of a girl who went to marry a man in Malaysia who it turned out already had a wife and two children. The marriage was called off and the girl was stranded.

"For a month her parents heard nothing from her at all, had no idea how she was surviving, until finally she was able to call them to let them know that she had managed to find another husband."

Lewa also voices fears about the future of the girls, many of whom she says are underage.

"The women are there at the mercy of their husband. It's hard to talk to them - the husband is afraid to allow her out because he is afraid she could be arrested.

"NGOs have raised concerns about high levels of domestic violence in the Rohingya community. At least in a village in Burma you have relatives or village elders to turn to," Lewa says. "Stateless young brides in an alien country are particularly vulnerable to abuses by state authorities and locals, but also by their own refugee community."

An Indonesian policeman guards ethnic Rohingya people from Myanmar as they wait inside a police truck for identification by immigration personnel in Lhokseumawe, February 27, 2013.