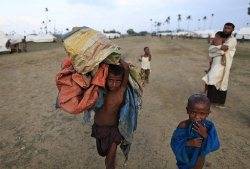 Rights groups say the Rohingya in predominantly Buddhist Myanmar face some of the worst discrimination in the world.
On a sweltering Sunday afternoon, Roma Hattu was rolling around on the bare concrete floor of the abandoned single-story building her family shares with three others behind Thetkepyin camp, breathing heavily and moaning.

The 30-year old was due to give birth in the next few days and was feeling unwell, but her husband didn’t have the money to take her to the nearest clinic a kilometer or so away.
Hattu, who already has two sons, is a stateless Muslim Rohingya displaced in western Myanmar since last year.

Her family has been sharing the building, which has fallen into disrepair, since June 2012, their only privacy a flimsy, tattered yellow rice sack used as a curtain.

Her husband Kalia, 40, doesn’t have a job. His betel nut shop went up in flames during deadly riots between Buddhists and Muslims, together with his house in Sittwe’s Narzi quarter.

The United Nations says at least 140,000 people - the majority of them Muslims - were forced out of their homes, but the real number may be higher because some are not registered as displaced.

Many are stuck in camps for internally displaced persons (IDPs) with few facilities and almost no work opportunities. They live on aid handouts and are not allowed to travel freely. They don’t know how long they will be displaced, or whether they will ever be able to go home.

Most of the unregistered Rohingya live in tiny straw huts. Straw, pieces of tarpaulin and plastic sacks are held together with thin bamboo poles. Families of up to 10 live cheek by jowl in a single tent, which can be unbearably hot during the day and will probably leak when the rains come in the next few weeks.

The UN has expressed concern that the majority of the displaced people are in makeshift camps located in paddy fields or other areas that will be flooded in the forthcoming rainy season. Their shelter and sanitation are already barely coping, and Rakhine state is often hit by tropical storms.

The UN’s $68 million appeal to help the IDPs is only 58 percent funded.

Rights groups say the Rohingya, a Muslim minority in predominantly Buddhist Myanmar, face some of the worst discrimination in the world. Rakhines and other Burmese, including monks, view them as undocumented immigrants from neighboring Bangladesh who deserve neither rights nor sympathy.

Bangladesh too does not recognize them, and the United Nations has said the Rohingya are "virtually friendless".

Children suffer the most from being displaced, as their education is disrupted and their lives are turned upside down. Many suffer from diarrhea and pneumonia, and there is concern they may develop malnutrition.

Informal community schools have sprung up and aid agencies have built spaces where children can play and have some semblance of a normal life.

Zaw Naing Tun is a Kaman Muslim from Kyaukphyu who has a Myanmar ID card. Kaman Muslims, unlike Rohingya, are one of the country's 135 official ethnic groups.

Yet he and his brother Htin Kyaw, who fled Kyaukphyu after their homes were burned down, have been unable to leave the IDP camp in Thechaung, less than an hour’s drive from the center of Sittwe.

Htin Kyaw said the security forces stopped them from leaving the camp. “I’m carrying an ID card, but I haven’t got the rights of a citizen,” he said.

Displaced Muslims say they are reliant on aid because there are no jobs. Unregistered Rohingya said they asked their children to beg for food.

In Thetkepyin IDP camp, the registered Rohingya said they eat boiled sweet potatoes with the rice and pulses they receive from the UN every day.
“Since we got here, we haven’t heard anything from the government,” said Than Myint, 35. “Foreigners came to visit us, but not the government.”

Hla Hla, a 25-year-old from Sittwe’s Aung Mingalar quarter, came to visit her parents-in-law at Baw Di Pha camp three months ago. She paid the security forces 30,000 kyats ($33) to bring her and her two young sons to the camp from Aung Mingalar, which Muslim residents are not allowed to leave.

She ran out of cash during her stay and cannot pay to go home. Her husband, now without a job, is in Maungdaw in northern Rakhine state.

She’s worried about her family back in Aung Mingalar who have lost their jobs.

“The market truck comes twice a week, but where will we get the money to buy food when we have no jobs?” she asked.

On Monday morning, a hired car took Hattu to the Dapaing district health clinic where there is an experienced midwife. There are no doctors and little medicine but the health assistant said her condition was “good”.

Kalia said he hopes their third child will be a girl.

A boy carries plastics sheets to use as shelter at a Rohingya internally displaced person (IDP) camp outside of Sittwe, May 15, 2013.