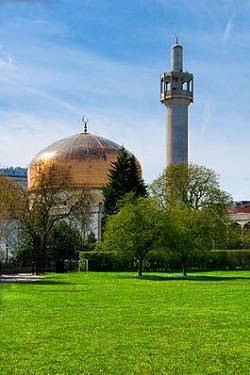 The study was prepared for the Muslim Council of Britain by a team of researchers, led by Sundas Ali, of the University of Oxford.

According to the report; one in three Muslims is under 15, compared with fewer than one in five overall. There are also fewer elderly Muslims, with 4% aged over 65, compared with 16% of the overall population.

The “British Muslims in Numbers” report indicates that more than half were born outside Britain, but 73 percent regard themselves as British.

The report, presented to Parliament, concludes that Muslims could play a decisive role in the coming general election, expected to be the closest in recent times, making up a significant share of voters in some of the most marginal seats in the country.

The report for the Muslim Council of Britain also highlights the community’s economic disadvantage.

Just one in five Muslims was in full-time employment, compared with one in three of the wider population. The researchers said Muslims face a “double penalty ... in entering the labor market – of racial discrimination as well as Islamophobia.”

The report stated: “There is need for various stakeholders – Muslim civil society, policy institutes, employers, trade unions and the Department for Work and Pensions – to facilitate conditions and opportunities in the labor market.
“Muslim civil society needs to have a better appreciation of the social realities.”

The report also showed almost half the Muslim population live in the 10 percent most economically deprived areas – an increase since 2001, when the figure was one in three Muslims.

“Taking data from the 2011 census, this important new report from the Muslim Council of Britain helps give us a snapshot of the socio-economic challenges and opportunities now facing Britain's Muslim communities,” Clegg said.

“What's not in doubt is that British Muslims can be proud of the contribution they make to our country. Drawing on analysis like this, together, we can help create jobs, drive growth and enable more people to get on – building the stronger economy and fairer society we want for Britain's future.”