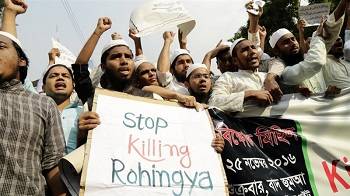 When Faizul fled the shouldering remains of his village in Myanmar's Northern Rakhine state, he barely noticed the shards of wood that punctured every extremity of his body. He just wanted to escape the bullets raining down from a helicopter above. But by the time he reached Bangladesh, a shrapnel wound on his right leg had grown to the size of a golf ball, and its yellow flesh was festering with signs of an infection.

Two weeks later and the bacteria still threatens to invade deeper into his weakened body. He may have reached a refugee camp, but Faizul still cannot access professional healthcare.

"I am moving house to house every day, as it is illegal for me to be here," he says while beads of perspiration crawl down his face.

The attack on Yay Khaw Chaung Khwa Sone village, where Faizul lived with his pregnant wife and two-year-old child, came in retaliation for the death of a column commander in an ambush by Rohingya fighters a day earlier, as reported by neutral observers and independent non-governmental organisations in Myanmar that have been monitoring and recording such incidents in regular reports.

"The military came into the village and whoever was in front of them, they started killing. Four people were shot while running away with me. I saw it with my own eyes," says Faizul, who also claims to have seen a number of other atrocities.

"I saw two men hide inside some straw bales. They were burned alive in there … Two girls were also thrown into the fire," he says.

Government spokesman Zaw Htay questioned the veracity of these claims in a conversation with Al Jazeera.

"Our government is not denying all of the allegations made by the international community … but [it is] very difficult to believe the Muslims in Maungdaw [a city in Rakhine state], as they are setting fire to their own villages, according to our information from ground troops and security forces," he said.

The latest outbreak of violence comes nearly two months after Rohingya fighters launched their first attack on a Myanmar border guard post. That ambush left nine officers dead and unleashed a brutal counterinsurgency operation which, according to official numbers, has killed more than 100 Muslims from the Rohingya minority.

Local sources say the death toll is much higher and accuse the military of a litany of human rights abuses including extrajudicial killing, arbitrary arrest, arson and rape. Meanwhile, a UN official has accused the government of pursuing the 'ethnic cleansing' of Rohingya Muslims from Myanmar.

The attack on Yay Khaw Chaung Khwa Sone village was the first to see artillery and airborne ordinance since the counterinsurgency began. Graphic images of bloodied children and charred remains have emerged from the attack. This was the final straw for thousands of Rohingya Muslims, who have fled northern Rakhine state and sought refuge in neighboring Bangladesh.

Bangladesh is already a reluctant host to more than 300,000 Rohingya Muslims, who have been arriving in the country intermittently for nearly 40 years.

The government has permitted only 30,000 to register as refugees with the UNHCR. The others survive in the shadows, beside the official camps, relying on the registered refugees for food and clean water, and under the constant threat of deportation.

Like those that preceded them, recent Rohingya arrivals have received a cold welcome in Bangladesh.
According to Amnesty International, the authorities have cracked down on the flow of refugees from Myanmar and, over the past two weeks, the border guards have detained and forcibly returned hundreds of Rohingya.

The move is a violation of the principle of non-refoulement [PDF] - a prohibition under international law from forcibly returning people to a country or place where they would be at risk of serious human rights violations.

"The Rohingya are being squeezed by the callous actions of both the Myanmar and Bangladesh authorities. Fleeing collective punishment in Myanmar, they are being pushed back by the Bangladeshi authorities. Trapped between these cruel fates, their desperate need for food, water and medical care is not being addressed," said Champa Patel, Amnesty International's South Asia director.

Faizul travelled to Bangladesh under the cover of night, hoping to evade the border police, who heavily patrol the Naf river which separates the country from its troublesome neighbor. He travelled with seven male companions, leaving his pregnant wife and two-year-old child in a nearby village.

"It would be too dangerous with a small child, as he would cry and draw attention to us," he says, trying to ease his feelings of guilt at leaving them behind.

"When the situation is calm, I will bring over my wife and child," he says. "But I am worried all the time for my wife … the baby is due in two months."

Despite international condemnation, the government campaign continues against the group responsible for the deaths of the military and security personnel in the border attack.

Faizul explains that he felt he had no option but to leave, as members of that group live in Yay Khaw Chaung Khwa Sone village and he feared he would be mistaken for one if he stayed in Myanmar.

The group has reportedly identified itself as Al Yaqeen, the movement of faith or hope. Their demands are not religiously motivated. In videos posted to their YouTube website, group members, filmed holding machineguns in a jungle setting, demand that their citizenship - revoked by the military government in 1982 - be reinstated and that they be given equal rights within Myanmar.

In their most recent video, uploaded to YouTube two weeks ago, the group calls on the international community to provide medical support and argues against the labelling of their community as "terrorists".

According to Faizul, the fighters used Yay Khaw Chaung Khwa Sone to launch an ambush on the Myanmar military. Only four members had guns, he says. The rest were armed with homemade swords.

Faizul admits that his entire village cooperated with the fighters when they launched their attack on the military. "The village is supporting them because some of them are from our village and because they are fighting for our rights," he says. "The military keeps killing people, so we have to defend ourselves."

The UN estimates that up to 30,000 people have been displaced from their homes in northern Rakhine state since the fighting began last month, while 70,000 are in immediate need of food aid. Half of the 3,000 children already diagnosed with severe malnutrition are now considered to be in their final throes of life, as reported by the UN Office for the Coordination of Humanitarian Affairs office in Myanmar, at a news conference in mid-November.

But humanitarian assistance to northern Rakhine state has been prohibited by the military. For many of those Rohingya who are vulnerable, isolated and trapped between the Bangladesh and Myanmar governments, Al Yaqeen offers the only alternative.

"There are over 30,000 IDPs [internally displaced persons]. A thousand people who ran away to Bangladesh are now being pushed back; of course, there is the possibility that group membership will now grow," Kyaw Win, director of the Burma Human Rights Network, told Al Jazeera.

"This group is the product of oppression," says Kyaw Win, whose organization has been researching the fighting groups in Rakhine. "They are people from that area and that location; we do not think they are supported, trained or have any connections to the outside. If they were supported or funded, why don't they have boots to wear in the jungle, why don't they have enough food, or any medicine?"

To counter the alleged threat from Rohingya fighters, the Myanmar government has begun arming and training a "regional police force" comprising non-Muslim residents from the troubled townships in northern Rakhine.

As the crisis deepens, many international observers are turning to State Counsellor Aung San Suu Kyi to condemn the human rights allegations levelled against the military.

But she has been silent on the matter. This silence is indicative of the limitations of Myanmar's first democratically elected government in more than half a century. Despite winning last year's landmark election with an overwhelming majority, Aung San Suu Kyi's party, the National League for Democracy, does not have constitutional authority over the military or security forces.

"If you look at the way the military operates," David Mathieson from Human Rights Watch told Al Jazeera, "she has no role and no way of directing them on the ground or governing their behaviour." Mathieson's organization has been tracking the destruction of Rohingya villages using satellite technology.

"Aung San Suu Kyi has already said that she is no longer a human rights activist or a humanitarian, but a politician ...," says Mathieson.

It is a bitter lesson for the persecuted minority.

"I was ready to give my life for Aung San Suu Kyi, but now she will not speak up for us," says Faizul, as he drags his wounded body in search of another bed. "The world needs to intervene, if they don't help us, then there will be no future for the Rohingya."

Supporters rally against attacks on the Rohingya in Myanmar, in Dhaka, Bangladesh