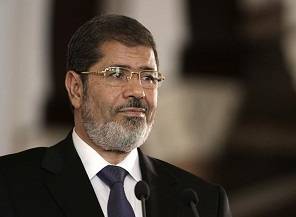 The death of former President Mohamed Morsi is only the latest in a series of untold tragedies that have afflicted Egypt since the spark of revolution flickered more than eight years ago. His unlikely rise to the presidency reflected the aspirations of millions of Egyptians for a future free of despotic military rule. His subsequent arrest at the hands of a resurgent dictatorship made him one of 60,000 Egyptians imprisoned for daring to seek a better life.

The mysterious circumstances surrounding Morsi's death while in the custody of Egyptian state security services bring up many questions.

But there is no doubt about the regime's culpability for a death it has long sought, whether through a series of spurious death penalty cases against the former president, or as a consequence of the appalling prison conditions that have contributed to the demise of his health and which have been roundly condemned by international human rights bodies.

For Abdel Fattah el-Sisi, the field marshal who overthrew Morsi in a July 2013 coup and restored military rule in Egypt, his death signals yet another milestone in a six-year mission to bury any remaining vestiges of Egypt's short-lived democratic transition.

That process began when the then-defence minister ordered the arrest of the democratically elected president, who had appointed him, and proceeded to crack down on his supporters. The massacre at the Rabaa Square sit-in six weeks later in which nearly 1,000 protesters were killed represented the largest single-day mass killing of civilians by security forces in Egypt's modern history. In the years since, the el-Sisi regime has banned all forms of protest, shut down independent media, imprisoned tens of thousands of activists and even engaged in extrajudicial killings.

El-Sisi was anointed president in 2014, following a sham election held under extremely repressive conditions, and re-elected for a second term last year in another equally absurd vote in which the incumbent's sole opponent had endorsed him.

The constitutional amendments the regime pushed through earlier this year have all but cemented the Egyptian military's extraordinary privileges over civil society and were intended to ensure an el-Sisi presidency for decades to come. All the while, the economic deprivation, physical insecurity and basic human indignity against which millions of Egyptians mobilised in 2011 have gotten far worse.

In contrast to el-Sisi's iron-fist approach to power, Morsi's path to the presidency mirrored the uncertainties and anxieties of the society from which he emerged. Born in 1951 in a small village northeast of Cairo, Morsi came of age during the height of Gamal Abdel Nasser's presidency in which Egypt's authoritarian system first took root.

He relocated to Cairo to pursue his higher education as part of a broader wave of urban migration from the Egyptian countryside. But the collapse of Nasserism following the country's defeat in the 1967 war with Israel, and the inability to meet the basic needs of a rapidly growing population, sent Egypt into a crisis. Like many other Egyptians, Morsi pursued further studies abroad, receiving a doctorate in engineering in the United States before returning to teach at an Egyptian university during the early years of President Hosni Mubarak's rule.

In some ways, Morsi represents a lost generation, millions of Egyptians deprived of any say in their own governance for decades, who were later forced to watch as an octogenarian president prepared to hand over power to his son Gamal who was in his early 40s. Rather than wallow in his own marginalisation, Morsi joined many others of his generation in devoting much of his life to public service, working within the Muslim Brotherhood's political wing, which offered itself as an alternative to the corrupt ruling National Democratic Party.

Although it had been outlawed since 1954, by the late Mubarak era, the Muslim Brotherhood had steadily emerged as a significant opposition movement within Egyptian civil society, offering crucial social services and joining a broad cross-section of society in calling for serious political reforms and demanding democratic elections. That opportunity finally arose following the mass protests that unseated Mubarak in February 2011.

Unlike Gamal Mubarak, who believed himself destined to inherit his father's seat, there was nothing to suggest that Morsi ever desired the presidency he eventually won in the country's first-ever free presidential election. Nor did he prove particularly suited for the position, which had little use for his years of experience in activism within a closed political system. However, what most of Morsi's harshest critics failed to grasp during his precarious year in office were the structural impediments that would have doomed any figure from the ranks of Egypt's revolutionaries to failure.

On the eve of the country's historic presidential election, the ruling military council quietly issued a decree that effectively stripped the incoming president of all executive powers. Months later, when Morsi attempted to reclaim the powers of his office, a predictably alarmist state media and a distrustful political opposition condemned it as a sinister power grab. The weakest president Egypt ever had, had incredibly become "pharaoh" in the eyes of an increasingly fractious public.

In a sense, Morsi's greatest mistake was in managing to convince Egyptians that he held the powers of the office to which he was elected. Whether fairly or unfairly, by the end of his first year as president, every new failure had been laid at Morsi's feet. The accusations had even crossed over into the ridiculous: Morsi was supposedly negotiating a secret sale of Egypt's pyramids to a foreign country when he was overthrown. Some of the conspiracy theories would have been laughable had they not ended up on a list of court charges for which he would later face a possible death sentence.

Absent from many of the critiques of Morsi's ill-fated presidency was the role of countless other actors committed to ensuring the failure of Egypt's revolutionary moment: government bureaucrats loyal to the former regime who refused to implement presidential policies; an oligarch class that created artificial energy shortages to stir popular discontent; a political opposition that cynically played the role of spoiler when it could not defeat Morsi or his party in elections; foreign governments that bankrolled the counter-revolution; and of course, the Egyptian armed forces, which continued to hold most of the cards during the contentious revolutionary transition.

One could certainly point to Morsi's leadership flaws, his poor communication of key decisions, and his inability to forge a broad revolutionary coalition to withstand the coming counter-revolution, but in the face of such an onslaught, it is unlikely that any opposition figure would have stood a chance.

And so his presidency came to an unceremonious end before it ever really began. Morsi's legacy encompassed little more than the momentary hope for a democratic future embodied in his ceremonial assumption of a post long regarded as the sole domain of ruthless authoritarians.

But as his successor would soon realise, that brief hope has proven to be stubbornly hard to extinguish. Six years after the coup that overthrew Morsi, many Egyptians continue to perceive the current regime as illegitimate.

It is probably for this reason that the el-Sisi regime, consistent with its rampant inhumanity, denied a former president a proper public funeral, instead hastily arranging a pre-dawn burial which only two of Morsi's surviving family members were allowed to attend. By choosing to bury him in the dead of night, the regime has only succeeded in shining a light on the enduring tragedy of a nation.