A Believer Should Not Be Stung Twice from the Same Hole! 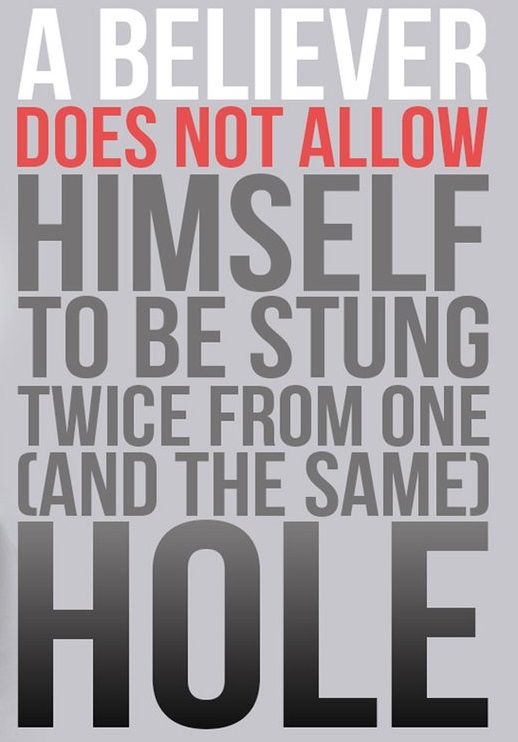 To be precautious and prudent is a Prophetic directive, especially when dealing with those who have been proven deceitful and dishonest. It is unbecoming of a Muslim to be gullible that he would be deceived twice by the same trick. A person may see things in other than their real form and, thus, he gets deceived by them – and this is normal – but to not be precautious and allow himself to be deceived twice, this is unacceptable naivety that is unbecoming of a believer. This directive is a universal principle and most beneficial advice eloquently coined in a terse statement made by the master of eloquence, Prophet Muhammad

Abu Hurayrah, may Allah be pleased with him, narrated that the Prophet

said: “A believer should not be stung twice from the same hole.” [Al-Bukhari and Muslim]

The Hadeeth uses the Arabic verb “Yuldagh” wich means to be bitten or injured by a venomous creature such as scorpions and snakes; and the term “Juhr” (hole) means the burrow dug by vermin and wild animals.

Commenting on the Hadeeth, Abu ‘Ubayd

said: “This eloquent statement was never uttered by anyone before the Prophet

and he first said it to an Arab poet named Abu ‘Azzah Al-Jumahi. When this man was taken prisoner by the Muslims during the Battle of Badr, he appealed to the Prophet

to release him without ransom because he was poor and had a family to support. The Prophet

granted him his request. When the same man was later taken prisoner by the Muslims in the Battle of Uhud, he again appealed to the Prophet

for his release, mentioning his poverty and dependents. In response, the Prophet

said to him: “You will not boast in Makkah and say that you had mocked Muhammad twice!’ Thereupon, the Prophet,

ordered that he be killed. This story was cited by Ibn Is-haaq in Al-Maghaazi.” [End of Quote]

Given the richness and depth of the meaning of this succinct Prophetic directive, the commentators of Hadeeth mentioned many interpretations for it that are all possible despite its brevity.

cited some of these possible interpretations. He quoted Al-Khattaabi

saying: “The wording of this Hadeeth is in the form of a statement intended as an imperative, as if saying: let the believer be firm and precautious lest he would be fooled twice by the same source. This applies to one’s religious affairs as much as it applies to worldly ones. In fact, the religious affairs are worthy of precautious and prudence with greater reason. It was also said that the statement: ‘A believer should not be stung twice from the same hole’ means that when a person commits a sin and receives his due punishment in the worldly life, he will not be punished for it again in the Hereafter. I believe that if the sayer meant that the general indication of the Hadeeth’s wording includes this meaning, then it is possible or else the context of the Hadeeth does not support this specific meaning. This is further supported by the view that the Hadeeth included a warning against letting oneself be fooled and a reference to being astute.” [End of Quote]

It can be said that the Hadeeth instructs a Muslim to be precautious of potential harms incurred on his worldly affairs or those of the Hereafter. He is enjoined to be vigilant and prudent regarding all his affairs. The fact that the wording of the Hadeeth indicates one of them in particular (i.e. the worldly affairs) does not prevent interpreting it to apply to both the worldly and religious affairs. What matters is the general indication of the statement, not the specific context in which it was made.

In his explanation of the Hadeeth, Ibn Al-Humaam

said: “The Hadeeth ‘A believer should not be stung,’ could be read as an imperative statement indicative of the forbiddance in this regard, meaning: Let the believer be heedful and prudent so as not to be harmed twice in the same manner. This is an example of the succinct speech of the Prophet

that none had ever coined before him. The intent was to warn the believer against exposing himself to the same harm twice, and this is required of him regarding the affairs of the Hereafter as much as it is required for his worldly affairs. When a believer commits a sin, his heart should ache the same way his body aches when he is stung, and thus he avoids committing the sin again. After the incident when Prophet Yusuf (Joseph), may Allah exalt his mention, almost responded to Zulaykhah’s temptation, he would not speak to a woman except while covering his face.” [End of Quote]

Evidently, a Muslim needs to heed this prophetic directive in all his affairs, especially with people who are principally treacherous and dishonest and known for their evil intentions towards Muslims. A believer should be cautious of the plots of Satan and the enemies of Islam with their different names and ideologies. It is unbecoming of a Muslim to let himself be vulnerable to their scheming and deceit. The basic principle regarding the Muslim’s interactions with them should be extreme precaution, heedfulness and prudence; otherwise, he would be repeatedly harmed by them and vulnerable to serious dangers.