The structure of the Ka'bah 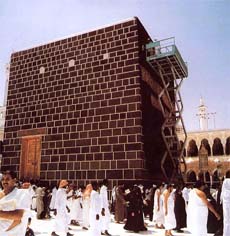 Due to flooding, fires, attacks and other disasters, the Ka'bah has been rebuilt on several occasions, but always on the same foundation built upon by Ibraaheem, may Allah exalt his mention. One of these renovations occurred few years before Prophet Muhammad's

prophethood. Although this was before the time of the Quranic Revelation, the people of Quraysh made a pledge not to use money made from impure sources, such as prostitution, usury and other types of bad dealing or injustice. For this reason, they ran out of funds and were not able to cover the "Hateem area" of the Ka'bah, which remains exposed to this day.

A disagreement broke out as to who would have the honor of placing the Black Stone in its position. Finally, one of the elders of the tribe suggested that the first man to walk through the gate the next morning should be the one to solve the dispute. This man happened to be the Prophet

who told the clan leaders to place the Black Stone on the middle of a cloth. Then each leader picked up one corner of the cloth and carried the stone to its place, where the Prophet

himself affixed it.
The Ka'bah today
The walls of the Ka'bah are somewhat irregular and do not measure the same all the way around. In ‘The Encyclopedia of the Orient’, it is reported that the base of the Ka'bah is 10.5 x 12 meters, and that the structure is 15 meters high, standing on a marble foundation, which is 25 cm high. According to Kjeilen (Editor of Encyclopaedia of the Orient), the door of the Ka'bah is in the northeastern wall, and is 2 meters above the ground.
It is narrated that when ‘Aa’ishah, may Allah be pleased with her, asked the Prophet

why the door was so high up, he told her: “Your people did that so they could let in whomever they wanted and keep out whomever they wanted. If it were not for the fact that your people are still new [in Islam] and too close to their Jaahiliyyah (pre-Islamic era), and I am afraid that they would resent it, I would think of incorporating [the wall] into the House and bringing the door down to ground level.” [Muslim]
Many people have associated the cubical shape of the Ka'bah with the egalitarian nature of Islam in that it does not distinguish between class, race and gender when it comes to faith and good deeds, among other explanations.
Inside the Ka'bah
The Ka'bah is essentially an empty room, which again emphasizes the centrality of Allah and contrasts sharply with its pre-Islamic plight as a house of idol-worship.
The walls and floor of the Ka'bah are made from marble. There are gold and silver lamps hanging from the ceiling, some of which are quite old, and the aroma of incense perfumes the room. Three wooden pillars hold up the roof, which is accessible by a ladder. The upper walls are covered with curtains. Verses of the Quran decorate the pillars, walls and curtains, and the room is big enough to accommodate about fifty people comfortably.
The Kiswah (cover) of the Ka'bah
The tradition of covering (or placing the Kiswah on) the outside of the Ka'bah started before the advent of Islam. Over the years, many kinds of materials were used, such as red rugs made of skin, striped sheets and other scraps of cloth in a myriad of colors. Many reports state that one of the leaders of Yemen called As'ad Al-Himyari was the first person to dress the Ka'bah thoroughly with a Kiswah.
The Prophet

later covered the Ka'bah with Yemeni cloth, while ‘Umar and ‘Uthmaan, may Allah be pleased with them, covered it with Qibti —an Egyptian white cloth. Others used silk to dress the Ka'bah. Sa’eed Ibn Mansour

reported in the Sunan that “Umar, may Allah be pleased with him, used to take down the old cover of the Ka'bah every year, cut it into pieces and distribute (the pieces) among the pilgrims, who used them as shelter from the heat of Makkah.”
To this day, changing the Kiswah of the Ka'bah is still an annual event. In a labor of love and devotion, over 200 specially trained craftsmen spend the entire year putting together a new Kiswah in a factory that is located in Umm Al-Joud, a suburb of Makkah. The Kiswah consists of 450 kilograms of pure silk that is dyed black and embroidered with gold and silver threads at a total cost of more than $4.5 million for materials and production. The embroidery displays verses of the Quran along with words and phrases that glorify Allah.
The Kiswah is affixed to the ground with the use of copper rings.
Care and upkeep
‘Aa’ishah, may Allah be pleased with her, said, “Perfume the Ka'bah, because this is a part of purifying it.” Ibn Az-Zubayr, may Allah be pleased with him, was known to perfume the entire interior of the Ka'bah with one pound of incense daily and two pounds of incense on Fridays.
When the Prophet

won victory in Makkah, he

smashed the idols inside the Ka’bah and washed it, ridding it of the impurities of Jaahiliyyah.
These days, the Ka'bah is washed twice per year with perfumed water, once before Ramadan, and once before Hajj.