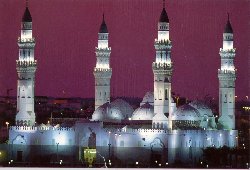 The Qubaa’ Mosque is considered one of the glorified mosques in Islam; it was the first mosque that was ever built in Al-Madeenah Al-Munawwarah. The Prophet, , himself placed its first stones and took part in building it when he was staying with Banu ‘Amr ibn ‘Awf. The Prophet, sallallaahu‘alayhi wa sallam, used to visit it from time to time.
Saalim, may Allah be pleased with him, would lead the prayers in Qubaa’ Mosque: It was narrated on the authority of Ibn ‘Umar, may Allah be pleased with him and his father, that he said, “Saalim, Abu Huthayfah’s servant, would lead the prayers in the Qubaa’ Mosque. He would lead the first immigrants and the Companions of the Prophet in prayers, and among them were Abu Bakr, ‘Umar, Abu Salamah, Zayd, and ‘Aamir ibn Rabee‘ah.” [Al-Bukhari]

Regarding its merit, Ibn ‘Umar, may Allah be pleased with him and his father, reported that, “The Prophet would go to Qubaa’ Mosque on foot or riding, and he would perform two Rak‘ahs [units of prayer] there.” [Muslim]

The Prophet, , said: “Prayer in the Qubaa’ Mosque is equal [in reward] to performing ‘Umrah.” [At-Tirmithi in hisSunan, Al-Albaani: Saheeh]

Therefore, Muslims have assigned a great deal of care and attention to that blessed mosque and made expansions and renovations in it whenever it was needed. Today, the Qubaa’ mosque is considered one of the landmarks of Madeenah and is frequently visited by Muslims from around the city, especially those who are coming to visit the Prophet's Mosque.

Ramadan and Hajj in the Muslim Travelers' Writings