How Should a Pilgrim Perform the Rites of Hajj? - I 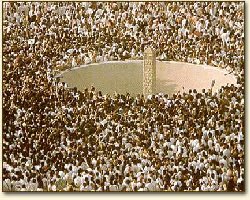 in order to attain thereby the love and forgiveness of Allah The Almighty (what means): {Say, [O Muhammad], "If you should love Allah, then follow me, [so] Allah will love you and forgive you your sins….} [Quran 3:31]

The most perfect manner in this respect is to perform Hajj At-Tamattu’ for the pilgrim who has not brought the sacrificial animal with him, for it is with this that the Prophet

and placed stress on it, saying: “Had I known earlier what I have come to know later, I would not have driven the sacrificial animal with me, and would rather have dissolved from the state of Ihraam along with you.” [Muslim]

Tamattu’ is when a pilgrim performs ‘Umrah perfectly during the months of Hajj and then comes out from it in order to assume Ihraam once again for Hajj in the same year.

*  When you arrive at Makkah, perform a seven-round Tawaaf (circumambulation) of ‘Umrah around the House, making the corner of the Black Stone your starting and ending point in each round. Then, offer a two-Rak‘ah (unit) prayer behind the standing place of Ibraaheem (Abraham)

either close to it if possible, or far from it (in which case there is no harm).

*  Once you have finished from the two Rak‘ah prayer, come out to As-Safa (mountain), and walk between it and Al-Marwah in a seven-round Sa‘y (going between Safa and Marwah), making Safa your starting point and Marwah your ending point.

*  Once you have finished from Sa‘y, cut short the hair of your head.

In this way, your ‘Umrah has been completed. Then, take off the clothes of Ihraam and put on your normal clothes.

*  When it is the forenoon of the eighth of Thul-Hijjah, assume Ihraam (for Hajj) from the very place you are staying at, make Ghusl if it is possible for you, put on the clothes of Ihraam and say:

*  Then, go to Mina and pray there the Thuhr (afternoon), ‘Asr (post-noon), Maghrib (sunset), ‘Ishaa’ (night) and Fajr (dawn) prayers, shortening but not combining prayers together.

*  When the sun rises on the ninth of Thul-Hijjah, go to ‘Arafah and combine in advance there both Thuhr and ‘Asr prayers, two Rak‘ahs each, and stay there until sunset, and continue to do Thikr and Du‘aa’ while facing the Qiblah.

*  When the sun sets, leave ‘Arafah for Muzdalifah and offer Maghrib, ‘Ishaa’ and Fajr prayers there, and stay there devoting yourself to Du‘aa’ and Thikr until a short while before sunrise.

If you are too weak to crowd with the people at the throwing of pebbles, there is no harm if you leave for Mina towards the end of the night, in order to throw the Jamrah before the people crowd.

*  When it is a short while before sunrise, leave Muzdalifah for Mina, and once you have arrived there, do the following:

a) Throw Jamrat Al-‘Aqabah (the largest pillar), the closest to Makkah, with seven pebbles one after the other, and say ”Allahu Akbar” with each pebble thrown.

c) Get your head shaved, or your hair cut short, although shaving is better; and the woman shortens her hair the length of a fingertip.

You should do those previous three in the same order if it is possible for you, beginning with throwing, then slaughtering and then shaving. But if you change this order, there is no harm.

After throwing and shaving your head or cutting short your hair, you have then dissolved the state of Ihraam, and that is the first dissolution, by putting off the clothes of Ihraam and wearing your normal clothes, thereby anything forbidden by Ihraam becomes lawful for you save (sexual relation with) women.

*  Then, descend to Makkah and perform Tawaaf Al-Ifaadhah, (the Tawaaf of Hajj), and make Sa‘y between Safa and Marwah (The ‘Sa y of Hajj).

By this you have perfectly dissolved the Ihraam, and this is the second dissolution according to which all things forbidden by Ihraam become lawful for you, including (sexual relations with) women.

*  After finishing Tawaaf and Sa‘y, go to Mina and spend there the eleventh and twelfth nights.

*  Throw the three Jamrahs on the eleventh and twelfth days after the sun declines from the middle of the sky (Thuhr prayer time), beginning with the first, which is the farthest from Makkah, then the middle, and then Jamrat Al-‘Aqabah, each with seven pebbles one after the other, and say ‘Allahu Akbar’ with each pebble thrown. After throwing the first and middle Jamrahs, stand and supplicate Allah The Almighty while facing the Qiblah. To throw before the time of Thuhr on those two days is not sufficient to meet the obligation.

*  When you wish to return to your country, then, at the time of your departure, perform the Farewell Tawaaf, seven rounds around the Ka‘bah. But the Farewell Tawaaf is not due on the menstruating woman and the woman suffering from post-partum bleeding.

How Should a Pilgrim Perform the Rites of Hajj? - II