Performing 'Umrah During the Hajj Months 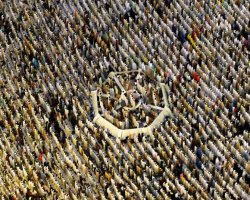 Allah Says (what means): {….And when you are secure, then whoever performs 'Umrah [during the Hajj months] followed by Hajj [offers] what can be obtained with ease of sacrificial animals….} [Quran 2:196]

After mentioning what the person in the state of Ihraam (sacral state) who was prevented from performing (or completing) Hajj or 'Umrah, must do, Allah mentioned what he should do when he is secure. Allah mentioned the ruling of Tamattu` during the Hajj days, which means performing both 'Umrah and Hajj during the Hajj season [there are additional details in this regard which was explained by the Islamic jurists].

We will only discuss the part of the verse which states when the pilgrim who has completed the rites of Hajj, whether he commenced his state of Ihraam with the intention of performing both 'Umrah and Hajj (Qiraan Hajj) or performing 'Umrah and then Hajj after finishing the 'Umrah (Tamattu` Hajj). The person performing any of these two types must offer a sacrificial animal (as Hady). This sacrificial animal must be a sheep at least, according to the preponderant opinion of scholars. However, a camel or cow suffices for seven.

said, “The verse of Tamattu` Hajj (i.e. {…then whoever performs 'Umrah [during the Hajj months] followed by Hajj …}) was revealed in the Book of Allah, and we performed Hajj accordingly with the Messenger of Allah

then nothing was revealed in the Quran prohibiting it, nor did the Prophet

prohibit it until he died.” [Al-Bukhari and Muslim]

This Hadeeth proves that Tamattu` Hajj, i.e. performing 'Umrah during the months of Hajj followed by Hajj is permissible.

It is noticed that the Arabic word “Tamattu`” that came in the verse was used in its linguistic meaning which is “benefiting”. The verse also referred to what the Islamic jurists call “Tamattu`” and “Qiraan”, which are two forms of Hajj in the Islamic Sharee‘ah (legislation) that invalidated the legislation of Jaahiliyyah (the pre Islamic era) in this regard.

Allah legislated Qiraan and Tamattu` Hajj as a concession for people and to cancel the practices of Jaahiliyyah, which used to prevent performing 'Umrah during the Hajj season.

Allah Says (what means): {…And whoever cannot find [or afford such an animal] - then a fast of three days during Hajj and of seven when you have returned [home]. Those are ten complete [days]….} [Quran 2:196] This sentence of the verse is conjoined to the sentence {…whoever performs ‎‎'Umrah [during the‏ Hajj months] followed by Hajj…}. The meaning:

‎Whoever performs both 'Umrah and Hajj, must offer a ‎sacrificial animal. If he could not, then he has to fast ten days; ‎three days during Hajj and seven when he returns home. ‎

Scholars say that it is better for such a pilgrim to fast the ‎three days during the first ten days of Thul-Hijjah before the Day of ‘Arafah. However, scholars of Tafseer (exegesis) mentioned other opinions regarding the best time for fasting these three days.

Allah made fasting a substitute for the sacrificial animal and a further concession and facilitation. That is why they were divided into two groups three days during Hajj and seven after returning home‎.

*  Some of them said that it is meant for stressing and confirming the meaning, the same as the verse in which Allah Says (what means): {…or bird that flies with its wings …} [Quran 6:38] Also, the same as when the Arabs say, “I saw with my own eyes.” or “I heard with my own ears.”

*  Other scholars said that “complete” here means that these days must be completed and fulfilled. At-Tabari

*  Others said that “complete” here means that these days serve as a complete substitute for the sacrificial animal.

Fasting was ordained partially (three days) during the Hajj to perform part of the worship immediately upon occurrence of its cause (inability to offer a sacrificial animal). The ten days were divided into two groups consisting of three days and seven days, because those two numbers (three and seven) were used a lot for regulating other religious and jurisprudential matters.

Allah Says (what means): {…This is for those whose family is not in the area of Al-Masjid Al-Haraam…..} [Quran 2:196] The word “This” refers to the sacrificial animal or its substitute of fasting.

{“Those whose family is not in the area of Al-Masjid Al-Haraam”} i.e. those who are not residents of Makkah. The meaning of this part of the verse is:

Offering the sacrificial animal is obligatory upon those who are not residents of Makkah, because the permissibility of offering 'Umrah at the time of Hajj relieves them from travelling again to perform 'Umrah. However, this is not the case with the people of Makkah, who do not face any difficulty in making 'Umrah at any time.

Allah concluded this verse Saying (what means): {…And fear Allah and know that Allah is Severe in penalty…} [Quran 2:196]

Allah commanded us to fear Him after stating the rulings of Hajj, which must include exertion and effort, in order to warn against negligence regarding them. Hence, the meaning of this part of the verse is:

Fear Allah in all what He commanded and forbade. Allah affirmed the observance of fearing Him when He Says (what means): {and know} in order to draw people’s attention to what He will say next, and affirming the fact that whoever violates His commands or commits whatever He has forbidden him from will thus be severely punished.