Hajj by Proxy: Rulings and Etiquette 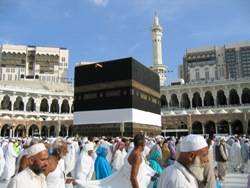 Performing Hajj by proxy is permissible if one is unable to perform it for legitimate reasons. Ibn ‘Abbaas

said that on the Farewell Pilgrimage, a woman said, “O Messenger of Allah, my father is very old. There is an old obligation of Hajj upon him from Allah, but he is not capable of sitting on the back of the camel.” Thereupon the Messenger

said: “Perform Hajj on his behalf.”

However, many people who ask others to perform Hajj on their behalf, though they are perfectly capable of doing it themselves, unknowingly deprive themselves of great reward, like the reward of bearing the fatigue, not to mention the chance to remember, supplicate to and show submissiveness before Allah The Almighty. Moreover, although Hajj is performed for the purpose of worship, many of those who perform Hajj on behalf of others do so solely for the sake of money, which is prohibited, because worldly gains should not spoil an act of worship.

People may often resort to Hajj by proxy in the case of supererogatory Hajj, even if they are capable of performing it themselves. Instead, they can perform supererogatory Hajj in person, or else provide other pilgrims with money so the reward of the Hajj can be shared. In one of the two narrations reported from Imam Ahmad ibn Hanbal

he forbade proxy in supererogatory Hajj for those who are able to perform it themselves.

Allah The Almighty Says (what means): {And when you have completed your rites, remember Allah like your [previous] remembrance of your fathers or with [much] greater remembrance. And among the people is he who says, ‘Our Lord, give us in this world,’ and he will have in the Hereafter no share.} [Quran 2:200]

An act of worship that is done not for the Sake of Allah The Almighty is not accepted. The Messenger of Allah

prevented seeking worldly gains in places of worship when he said: “If you see a man indulging in a transaction in the mosque, say to him, ‘May Allah not render your trade profitable.’” If this strict attitude is taken against those who utilize places of worship for worldly gains, what about those who turn the worship itself into a means of attaining worldly gains? Many of those who make Hajj on behalf of others bargain and ask for more money, which turns an act of worship into a craft or profession. Therefore, the Hanbali jurists maintain that it is invalid to employ someone to perform Hajj on behalf of another person. Ibn Taymiyyah

declared that whoever makes Hajj only to attain monetary benefits will not be rewarded in the Hereafter. However if it is done for a religious purpose, such as benefiting others with the reward of Hajj or aiming to increase acts of obedience through supplication and remembrance of Allah The Almighty during the rituals of Hajj, then it will be valid.

Those who agree to perform Hajj on behalf of others should have a sincere intention to seek the pleasure of Allah The Almighty. They should also fulfill the needs of their fellow Muslims who authorized them to make Hajj on their behalf. They should not focus on gaining worldly benefits, because if this becomes their sole interest, they should not be permitted to perform the Hajj by proxy. All the money they get from the person who authorized the Hajj will be theirs, unless the latter demands refunding the remaining amount after covering the costs of Hajj. The deputy should make the intention to perform Hajj and ‘Umrah on behalf of the latter, unless the former stipulates to perform ‘Umrah for his benefit. A person deputized to make Hajj on behalf of another person cannot deputize a third party, unless he obtains the consent of the person who commissioned him to make Hajj on his behalf. The reward of all acts related to rituals of Hajj goes to the one who authorized the Hajj, but all supererogatory acts of worship that exceed the rituals of Hajj go to the person who had been authorized. The representative should put in efforts to perform all the rituals with utmost dedication and fulfill the trust.