Issues of Consensus on Hajj - I 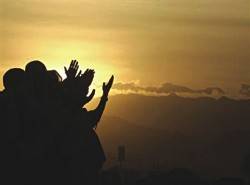 ‎‎It is agreed upon that students should be aware of issues of consensus before dealing with issues of difference. What is saddening is that many students breach some issues that have consensus, as they think these are controversial issues. ‎Listed below are some of the issues concerning Hajj on  which there is consensus. Some people may have different opinions regarding some of these issues, but it is sufficient for Muslims to know about this.

‎‎‎‎‎‎Scholars unanimously agreed that a Muhrim (a person in the state of Ihraam) is not permitted to use perfume.‎‎‎‎‎‎

‎‎‎‎‎‎Scholars unanimously agreed that a Muhrim (a person in the state of Ihraam) is not permitted to cut any of his hair except if there is an excuse for this as Allah The Almighty Says (what means): {…And do not shave your heads until the sacrificial animal has reached its place of slaughter….} [Quran 2:196] K‘ab ibn ‘Ujrah

said to him: "Are the lice on your head troubling you?" He said, "Yes." The Messenger of Allah

said: "Shave your head and fast for three days, feed six poor persons, or slaughter a sheep as a sacrifice." [Al-Bukhari and Muslim]‎‎‎‎‎‎

‎‎‎‎‎Scholars unanimously agreed that a Muhrim is not permitted to cut his nails except if there is an excuse.‎‎‎‎‎

‎‎‎‎‎We do not know of any difference in opinion among  scholars that a Muhrim man may wear trousers if he cannot find an Izaar (lower garment) and he may also wear Khuff (leather socks) if he cannot find sandals.‎‎‎‎‎

There is a consensus among scholars on the prohibition of killing game for a Muhrim, as Allah The Almighty states in the Quran.‎‎‎‎‎

said that scholars unanimously agreed that a Muhrim man must not cover his head. This is based on the fact that the Prophet

forbade men from wearing turbans or hoods when they are in a state of Ihraam. This is proved by what the Prophet

said when a man was crushed to death by his she-camel: "Do not cover his head as he will be resurrected on the Day of Judgment reciting Talbiyah."‎‎‎‎‎ Hence, he forbade covering his head because he remained in a state of Ihraam.

that she used to cover her face during Ihraam. She probably meant that she would draw a garment from above her head to cover her face when necessary. This interpretation of her practice does not contradict the agreement of all scholars. Ibn Al-Munthir

said that the inadvisability of wearing Yashmak (in Ihraam) is reported on the authority of Sa‘d, Ibn ‘Umar, Ibn ‘Abbaas and ‘Aa’ishah

and no one contradicted this opinion.‎‎‎‎‎

‎‎‎‎‎Scholars unanimously agreed that Muhrim women are permitted to wear long shirts, vests, trousers, Khimaars and Khuffs. This is because the commands of the Messenger of Allah

‎ apply to both men and women with the exception of the rulings on clothes as women must be covered as their bodies are ‘Awrah with the exception of the face. This is why it is permissible for women to wear loose-fitting clothes to conceal herself just as it is permissible for men to tie their Izaar so that their ‘Awrah will not be exposed if their Izaar falls. However, it is impermissible to tie the Ridaa’ (the upper garment).‎‎‎‎

said that scholars agreed that it is a Sunnah for women not to raise their voices, but a woman should speak in a voice that is only audible to her.‎‎‎‎

Issues of Consensus on Hajj - II