Reach for the Peak of Generosity in Ramadan 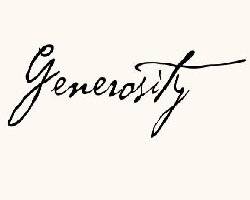 It was narrated on the authority of Ibn ‘Abbaas

was the most generous of all people, and he used to reach the peak in generosity in the month of Ramadan when Jibreel

used to meet him. Jibreel

used to meet him every night of Ramadan to teach him the Quran. The Messenger of Allah

was the most generous person – even more generous than the strong uncontrollable wind (in readiness and haste to do charitable deeds). [Al-Bukhari and Muslim]

In the narration of Imam Ahmad

the following addition was mentioned: “He was never asked something without giving it.” [Ahmad] [Shu‘ayb Al-Arnaa’oot: Saheeh]

explained the simile between his generosity and the uncontrollable wind, saying that the wind is sent by Allah The Almighty with mercy to spread beneficial rain which reaches all parts of the ground, so that it encompasses all those who are in need of it as well as others who are self-sufficient. Similarly, his generosity reached everyone.

Some scholars said that the generosity of the Prophet

explained this saying, “The more superior the time is, the more recommended is generosity therein.” Ibn ‘Umar

said, “I did not see anyone who is more generous or noble than the Prophet

O slave of Allah! This was the condition of your Prophet

regarding charity in Ramadan, and he is our ultimate role model. Then, where do you stand in this respect?

said, "I recommend you to increase charity in Ramadan, following the example of the Messenger of Allah

as people need money for their interests and as many of them are busy observing fasting and prayer to look for worldly gains."

Do not forget that the holy month of Ramadan is a great season for giving charity, and that fasting invites you to feed the hungry, and give the poor.

said, "The generosity of the Prophet

doubled in the month of Ramadan, and this has many benefits, including:

1. The virtue of the month, and the multiplied rewards for the deeds during it. In a Marfoo‘ Hadeeth that was narrated on the authority of Anas

he said: “The best charity is the charity of Ramadan.” [At-Tirmithi and Al-Albaani: Dha‘eef]

2. Helping those who are fasting and remembering Allah The Almighty with their worship, so he deserves the like of their reward, like the one who receives the reward of fighting in the cause of Allah The Almighty because he equipped someone else to do so.

replied: ‘For those who speak kindly, give food (as charity), maintain fasting and pray at night while people are asleep.'” [Ahmad]

All these attributes exist in Ramadan so that the fasting person is prohibited from false words and actions.

Offering prayer, fasting and giving charity allow the Muslim to attain the satisfaction of Allah The Almighty. Abu Hurayrah

said: “‘Who is fasting among you today?’ Abu Bakr replied, ‘Me.’ He (the Prophet

again) said: ‘Who among you followed a funeral today?’ Abu Bakr replied, ‘Me.’ He (the Prophet

said: ‘Anyone in whom these (good deeds) are combined will certainly enter Paradise.’” [Muslim]

The combination of fasting and charity has a great influence on the expiation of sins, and in protection from Hell – especially if it is joined to the night prayer. Mu‘aath

There may be some shortcomings in our fasts; however, the expiation of sins is contingent on abstaining from them. Charity rectifies the shortcomings and mistakes that occur while fasting, so it is obligatory to give Zakat-ul-Fitr at the end of Ramadan, as a means of purifying the fasting person from idle words and inappropriate speech.

Through giving, you lend your Lord a beautiful loan, so that you will find your charity on the Last Day when you will be poor and needy.

You may find your way to Paradise through a sip of water, a handful of dates, fruits, food, money and clothing that you give to a needy person.

Nothing preserves money better than charity, and nothing causes money to increase better than Zakah (obligatory charity). Many rich men died and left behind them fortunes, treasures and palaces, all of which turned against them to be reasons for their grief, regret and sorrow, because they did not use it in the proper way. Tomorrow it will be clear who is the winner and who is the loser.

O you who observe fasting, remember that Ramadan invites you to spend in charity, to have mercy for the poor and the needy, and at the same time, it is a call to lend your Lord a beautiful loan in this world so that He will recompense you when you meet Him. Allah Says (what means): {If you loan Allah a goodly loan, He will multiply it for you and forgive you. And Allah is Most appreciative and Forbearing.} [Quran 64:17] Remember that money, treasures and palaces are doomed to loss. Consider the saying of the Messenger of Allah

A Gate in Paradise for Those who Fast

The Signs of Acceptance and Rejection of Deeds