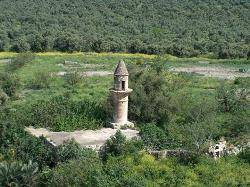 The month of goodness is fast approaching and the Muslims rejoice at its advent. People differ in their attitudes towards Ramadan: some strive to follow the example of the righteous predecessors in carrying out acts of worship and good deeds; others try to (moderately) do good deeds, hoping for the forgiveness of Allah The Exalted; while some others completely neglect the month of Ramadan. The last group conceives of Ramadan as nothing more than a month for watching TV serials.

What is Ramadan like in Palestine? The heart of the Ummah (Muslim nation) bleeds anew every day, as yet another Palestinian martyr sacrifices his life for the cause of Allah. A Palestinian child bids his father farewell to a remote world, about which that child knows nothing. He does not know that it is his father’s eternal abode. A Palestinian wife loses her beloved husband, hoping to meet him soon in a world where no neighbor or relative will turn down her pleas for assistance; where no hideous Zionist will threaten her life.

How is Ramadan in Jerusalem, the heart of the Islamic nation and the beloved jewel of the Muslims? How do the people of Palestine spend the month of Ramadan? Do they relish happiness and bliss in the company of their relatives and beloved ones like we do? Or do they suffer from the painful silence and neglect of their nation? How are our brothers and sisters in Islam, with whom we share the same Qiblah, Book and religion? How is my mother in Jerusalem? How is my father in Jerusalem? How is my brother, sister, and son?

We often hear about the tears of our sisters in Jerusalem during Ramadan and at other times. Indeed, the Zionists show no respect for the sanctity of the holy month of Ramadan, or for the sanctity of any other holy place or time. They even went to the extreme when they insulted and cursed the Lord of the Worlds!
Where is Al-Mu’tasim to hear the cry of a chaste Muslim woman who was asked to disrobe in prison?

O Salah ad-Deen, your memory quenches the thirsty hearts of the Muslims; the memory of great victories revives hope in the hearts in times of cowardice. The Ummah yearns for someone like you to rise again and restore the usurped glory and lost dignity of the Muslim nation. It is the Divine Law that those who have passed away will not return to the worldly life. However, we are attached not to you but to your Creator, and we implore Him to grant us another Muslim leader like Salah ad-Deen, even if none among us now is like you.

O Allah, we complain to You of our weakness, hopelessness, and scarcity of resources. You are the Lord of the weak people, and You are our Lord. O Allah, guide our nation to the genuine guidance, conduct its affairs in the optimal manner, grant Your obedient slaves glory and pride and humiliate the disobedient ones. Usher them to a world where good is enjoined and evil is forbidden. O Allah, grant victory to Your slaves who are striving for Your cause East and West. O Lord, purify every inch of this earth that was watered with the blood of the Muslims of those criminals who shed their blessed blood.

Hearts are softened during the month of Ramadan as they are more inclined to goodness and are closer to the Lord of the Worlds, the Knower of the Unseen. Do not let these abundant blessings and bounties, the sweetness of gatherings and Iftaar banquets in Ramadan, make you forget your brothers and sisters in Palestine. Do not forget to support them; offer them your unlimited aid and support, to the best of your abilities. Do not fail to remember to supplicate Allah The Exalted for them; for supplication is an effective weapon, and whoever withholds even his supplications from his victimized brothers and sisters in Palestine will never be willing to sacrifice his life for them one day.

The sweet memories of the great victories in Badr, Hitteen, ‘Ayn Jaaloot and the various victories and triumphs in the history of Islam remind us of these great Muslim leaders. Should we not rise up again and act like true men? True men are known by their actions, not just their words. Alas, we are merely men of words and speeches and not of actions!

The winds of victory and change are blowing. Allah The Exalted Says (what means): {Indeed, Allah will not change the condition of a people until they change what is in themselves.} [Quran 13:11] Therefore, let us work diligently and strive like an active beehive. We should strive in seeking knowledge, calling to Islam, performing Jihaad with wealth and self, tirelessly and without hesitation. How great it is to spread Tawheed at a time when knowledge has become a rare commodity and in a world that abounds with ignorant tyrants!

Indeed, seeking knowledge and calling people to the teachings of Islam are obligatory for Muslims. Participating in Jihaad, to the best of one’s abilities, the least of which is supplicating for our brothers and sisters in Palestine, standing by them and advocating their cause even with words, and reviving the Palestinian cause are commendable, much-needed efforts.

Whoever fails to do any of the above deeds to support his suffering brothers and sisters is sinful and has failed to shoulder his due responsibility towards them. Let us be the first building blocks in the edifice of the Islamic awakening so that the day will come when another Salah ad-Deen would emerge. What a great honor it is that one may lose, along with the responsibility due upon the Muslims!

O Muslims, let us wake up from our deep sleep and let us make the month of Ramadan a time to renew our covenant with Allah The Exalted, that was made even before we were born.

Let us make the month of Ramadan the beginning of raising a new Muslim generation that would bring a smile once again on the faces of our brothers and sisters in Palestine and in every occupied Muslim land. We yearn for a generation like that of Khaalid ibn Al-Waleed, Salah ad-Deen, Qutuz, Al-‘Izz ibn ‘Abdus-Salaam, and ‘Umar Al-Mukhtaar and the other great Muslim heroes.

O Allah The Exalted, grant us the victory that You have promised. O Lord, we acknowledge our failure to shoulder our due responsibilities and admit our mistakes. O Lord, we implore You not to punish us for our sins and the errors of the foolish people among us. O Allah The Exalted, rectify our grave condition and replace our disgrace with power, glory and victory.

Allah The Exalted Says (what means):

• {Allah has written, "I will surely overcome, I and My messengers." Indeed, Allah is All-Powerful and Exalted in Might.} [Quran 58:21]

• {And Our word has already preceded for Our servants, the messengers, [That] indeed, they would be those given victory And [that] indeed, Our soldiers will be those who overcome.} [Quran 37:171-173]

• {…And to Allah belongs [all] honor, and to His Messenger, and to the believers, but the hypocrites do not know.} [Quran 63:8]

We supplicate Allah The Exalted that the next Ramadan comes when the Muslim nation is in a better state than it is today.