Ramadan has come! Did you give in charity? - II 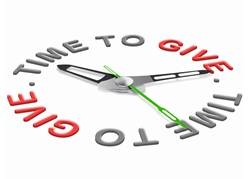 11- Charity pleases Allah The Almighty, rescues from destruction and perfects good deeds. Allah The Exalted Says (what means): {And spend in the way of Allah and do not throw [yourselves] with your [own] hands into destruction [by refraining]. And do good; indeed, Allah loves the doers of good.} [Quran 2:195]

12- Charity annoys Satan and necessitates the forgiveness of Allah The Exalted. Allah The Almighty Says (what means): {Satan threatens you with poverty and orders you to immorality, while Allah promises you forgiveness from Him and bounty. And Allah is all-Encompassing and Knowing.} [Quran 2:268]

said: "While a man was in the wilderness, he heard a voice from the cloud (commanding as thus): “Irrigate the garden of so and so”. After that, the clouds slinked aside and poured water on some stony ground. It filled a channel amongst the channels of that land and this man followed the water and found a person standing in the garden busy changing the course of the water with the help of a hatchet. He said to him: “O Servant of Allah, what is your name”? He said: “So and so”. It was that very name which he had heard from the clouds. He said to him: “O Servant of Allah, why do you ask me my name”? He said: “I heard a voice from the clouds from which this downpour came, saying: “Water the garden of so and so using your name. What do you do (for the favor shown to you by Allah) in this matter”? He said: “Now that you say this, I look to what yield I get from it and give one-third as charity out of it and I and my family eat another third of it and the remaining third I return to it as investment.”" [Muslim]

14- It saves a Muslim from miserliness. It is not at all noble that one who is rich sees his poor brothers hungry and needy and his feelings are not moved or affected to relieve their distress. Generosity is one of the morals of the Prophet

. He used to give like the giving of he who does not fear poverty. He used to say: "Spend so that Allah Spends on you."

15- It increases wealth and does not decrease it. It is a reason for its increase, development and blessing. Allah The Almighty Provides for, heals and supports the giver of charity. The Prophet

said: "Charity does not reduce fortune and when Allah Forgives one of His servants, the latter becomes more dignified. And whoever shows humility to men for the sake of Allah, Allah Will Exalt his eminence." [Muslim]

16- Charity is a reason for affluence in sustenance and prolonging one's lifespan. It protects the giver of charity and his family from afflictions and diseases and prevents an evil death and foul final stage of life. Anas

said: "The charity of a Muslim prolongs his lifespan, prevents an evil death and Allah Eliminates with it arrogance and poverty." [At-Tabaraani]

17- Allah The Almighty Helps the giver of charity to obey his Lord, Guides him to the paths of success and righteousness and Paves for him the road to happiness. Allah The Almighty Says (what means): {As for he who gives and fears Allah And believes in the best [reward], We will ease him toward ease.} [Quran 92:5-7]

18- Charity has a broad meaning. It encompasses every good deed; guiding a lost person, eliminating harm, establishing justice between two people, smiling at your Muslim brother, planting a tree, teaching beneficial knowledge, reconciling people and saying nice words are all considered types of charity. The Messenger of Allah

said: "Every Muslim has to give in charity." The people asked: "O Prophet of Allah! If someone has nothing to give, what will he do?" He said: "He should work with his hands and benefit himself and also give in charity (from what he earns)." The people further asked: "What if he cannot find even that?" He replied: "He should help the needy who appeal for help." Then the people asked: "And if he cannot do that?" He replied: "Then he should do good deeds and keep away from evil deeds and this will be regarded as charitable deeds." [Al-Bukhari]

19- Offering charity and establishing charitable projects treats the problem of poverty to which Islam specified solutions and included righteousness and doing good deeds in these solutions. It treats the envy of the poor to the rich so it protects society by the will of Allah The Almighty from the crimes of theft and revenge. The Prophet

warned his nation against the dangers of the behavior of the poor as he said: "A person in debt tells lies whenever he speaks and breaks promises whenever he makes (them)." [Al-Bukhari and Muslim]

20- For charity to be accepted and fulfilling of its conditions, it should be from lawfully earned money. Allah The Almighty Says (what means): {O you who have believed, spend from the good things which you have earned.} [Quran 2:267]. Charity is not accepted if it is ill gotten because the Prophet

said: "Whoever earned money from a sin, so he maintained with it his ties of kinship or spent it in the Cause of Allah, then all this would be collected and he would be thrown with it into Hellfire." [Abu Daawood]

It should be sincere for the Countenance of Allah The Almighty and not intended for showing off or seeking fame. He should direct his intention in charity to Allah The Exalted and never view it as great. Allah The Almighty Says (what means): {And do not confer favor to acquire more.} [Quran 74:6]

Ramadan has come! Did you give in charity? - I

A Gate in Paradise for Those who Fast

The Signs of Acceptance and Rejection of Deeds