Etiquettes of dialogue and speech -I

Islam came to instil and spread fine manners and noble etiquettes. When in conversation or discussion, a Muslim must maintain these because Islam comprehensively addresses all aspects of life, and requires a Muslim to be distinct in his character, creed, worship, manners, etiquettes and appearance.

Undoubtedly, Islam is the superior and lofty religion. There can be no doubt that its legislation is the final one and the finest amongst all revealed legislations.

This issue is vital and must be borne in mind when addressing our Lord, when speaking to people of knowledge, when conversing with friends, when talking to one's spouse, and when in a public gathering. If the manners and etiquettes of speech disappear, people’s gatherings will become futile and fruitless, and a source of enmity and hatred.

Guarding one's tongue: Allah commands us to guard our tongues and His Messenger

warned us against setting them loose.

Abu Hurayrah, may Allah be pleased with him, reported: “I heard the Prophet

saying: “A person utters a word thoughtlessly (i.e., without thinking about whether it is good or evil) and as a result, will plummet into the fire of Hell deeper than the distance between the east and the west.”” [Al-Bukhari & Muslim]

Bilaal Ibn Al-Haarith Al-Muzani, may Allah be pleased with him, reported that the Messenger of Allah

People often carelessly utter words, some of which may include or imply transgression of the limits of Islam. Such negative words may even be about Allah, or an objection to His decree, or the like, which would lead the person uttering them to the Hellfire.

For this reason, when the Prophet

was talking to Mu’aath, may Allah be pleased with him, he told him: “The root (i.e. foundation) of this matter is Islam, its pillar (mainstay) is the prayer and its apex is Jihaad (fighting in the cause of Allah).” Then he

asked: “Shall I tell you of that which holds together all these things?” Mu’aath, may Allah be pleased with him, said: “Yes, O Messenger of Allah!” So he

held his tongue between his fingers, and said: “Restrain this.” Mu’aath, may Allah be pleased with him, asked: “O Messenger of Allah! Will we really be held to account for what we say?” The Prophet

would never have supplicated against any of his companions, but rather it is an idiom used by the Arabs to draw people's attention to the importance of what follows it, which in this case was to highlight that misuse of the tongue is the basis for the punishment of most people.

Statements from the Salaf regarding controlling and guarding the tongue: There are many statements that came in this regard, such as the words of Ibn Mas’ood, may Allah be pleased with him: “That which requires imprisonment the most is one's tongue.” [End of quote] This is why many scholars have written books about the excellence of remaining silent.

was silent most of the time, and only spoke when absolutely necessary. He encouraged us to use kind words when we do have to speak. `Adiyy Ibn Haatim, may Allah be pleased with him, reported the Messenger of Allah

therefore clarified that kind words protect one from Hell and are thus a main cause of gaining entry into Paradise.

The etiquettes of dialogue and speech: There are many etiquettes that Islam legislated and encouraged, which reflect the magnitude of this topic. The following are some of these etiquettes:

·        Lowering one's voice: Allah Says (what means): “…And lower your voice; indeed, the most disagreeable of sounds is the voice of donkeys.” [Quran 31: 19] Raising one's voice reflects a lack of manners, unless the need arises, such as when delivering a Khutbah, or when warning someone, or teaching, or when it is feared that those at a distance may not be able to hear. On the other hand, one's voice should not be so low that people can hardly hear, nor should it be monotonous, as this instigates boredom on the part of those listening, which can cause them to lose interest altogether.

·        Shunning excessive talk and badmouthing others: Jaabir, may Allah be pleased with him, reported that the Messenger of Allah

said: “The dearest and nearest of you to me on the Day of Resurrection will be the one who is best in manners; and the most abhorrent among you, and the farthest of you from me (on that Day) will be the offensive (i.e. in speech), the garrulous, and the Mutafayhiqoon.” His companions asked him: "O Messenger of Allah! We know about the offensive and the garrulous, but we do not know who the Mutafayhiqoon are.'' He

replied: “(They are) those who are arrogant when they speak.” [At-Tirmithi] This is a stern warning to not sound arrogant or talk to people with words that they do not understand in order to demonstrate that one is knowledgeable or eloquent.

·        Listening attentively to others: This is especially the case when the Quran is being recited; Allah Says (what means): “So when the Qur'aan is recited, then listen to it and pay attention that you may receive mercy.” [Quran 7: 204] The worthiest person of being listened to was the Prophet

and when his companions practically applied this, they attained an exalted level of manners and glorified the Prophet

with his due glory. In fact, Allah commanded the believers to lower their voices in his presence, as He Says (what means): “O you who have believed! Do not raise your voices above the voice of the Prophet or be loud to him in speech like the loudness of some of you to others, lest your deeds become worthless while you perceive not.” [Quran 49:2] This also applies after his death, by lowering one's voice when his prophetic narrations are being related.

Etiquettes of dialogue and speech -II

Etiquettes of dialogue and speech -III 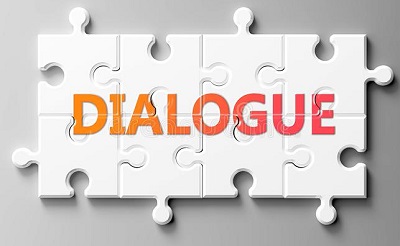