Iraq's medical professionals have reacted with caution to a government waiver that doctors be allowed to carry arms for self-defense purposes.

The Baghdad government is hoping the arms initiative will improve security conditions to lure doctors who now reside in Syria, Jordan, Egypt and the Gulf back to the country.
Nadhim Abd al-Hamid, the chairman of the Iraqi Physicians Union, welcomed the decision considering it as part of psychological tactic.
He said: "It would make doctors feel more confident, and give a message to assailants that doctors are armed so they would think twice before attacking them."
Hussain Mousa, the union's representative in the southern Iraqi province of al-Muthana wants the government to ensure better security for doctors rather than licensing gun ownership.
"The decision is definitely positive, and would protect doctors; however, we would hope that Iraqi government would work hard on enforcing the rule of law rather than allowing doctors to carry guns," he told Al Jazeera.
Doctors in exile
Since the US-led invasion of the country in 2003, Iraqi doctors have been the target of unknown assailants.
According to reports from the Iraqi Physicians Union, more than 200 of the country's leading medical professionals have been assassinated and more than 7000 have been forced to leave after receiving death threats.
Some of them are hoping for security to improve so that they could be repatriated, while others say they are resigned to the fact they may never return and instead look westward for asylum.
Prior to 2003, the Union numbered 37,000 registered professionals; today, the number stands at just over 12,000.
Marwan al-Zubeidi, an Iraqi doctor who was threatened by militia, left Iraq in 2006 and now lives in Syria.
He believes allowing doctors to arm themselves does little to protect them.
"It is a trap to push the doctors to go back to Iraq, but I do not think any doctor would buy it," he said.
"Even if they provide us with bodyguards we would not go back. Members of Parliament with bodyguards and bullet-proof cars are being assassinated, so how can a gun possibly protect us?"
Al-Zubeidi says that even newly-graduated doctors are being gunned down and no one appears to know why.
"No killer has been caught, no one has been brought to justice," he added.
Promises of death
Umar al-Kubaisi, a former senior cardiologist and hospital manager says, he received a bullet stained with blood attached to a letter threatening him of "dire consequences" if he did not leave Iraq in 2005.
Al-Kubaisi lived through the first days of the fall of Baghdad when his hospital and other medical facilities were looted and stripped of valuable precision instruments.
"Thousands of doctors have been threatened, beaten and attacked in their houses and clinics, which means it is not an act of one individual gang or group. Larger forces are at play here, ones with human and financial resources to carry out such terrorism," he said.
Al-Kubaisi thinks the waiver allowing him to carry arms falls far short of improving the conditions which would allow doctors to feel secure in their own country.
He says the government should investigate who is behind the mass killings of Iraq's doctors and professionals.
Threatened professionals
The waiver has also been heavily criticized by non-medical professionals who say all sectors of Iraq's once thriving middle class have been targeted.
Humam Salman, an Iraqi civil engineer who fled to Dubai after receiving death threats, believes the Iraqi government has no concrete plan to protect Iraqis.
He said: "I was angry when I left Iraq, I was upset because when I reported the threat to the security forces I did not receive adequate protection. I did not feel I was properly guarded, and quickly made up my mind to leave and save my life and my family's life.
"[It is] not only doctors who received threats; everyone with fine qualifications has been targeted: engineers, lawyers, pilots, teachers ... how will the government protect all of them?
But the Iraqi government says it has achieved success in bringing doctors back to the country, particularly after succeeding in reducing the level of violence in Baghdad and many of the provinces.
In statements made to local media in October, the ministry of health said that close to one thousand Iraqi doctors returned to Iraq in recent weeks.
Salih al-Hasnawi, the Iraqi minister of health, said he is closely monitoring the plight of Iraqi doctors abroad and providing them with assistance in repatriation efforts.
Khamis Hussain al-Saad, a senior official in the ministry of health, told Al Jazeera: “I think the ministry has succeeded in making doctors feel more comfortable and safe to return to their country."
"Technically, government doctors are asked to sign a few papers and they are back in service. We expect more doctors to return in the near future."
PHOTO CAPTION
Iraqi doctors hold a banner complaining of being targeted by militias and harassment by security forces [EPA]
Source: Aljazeera.net 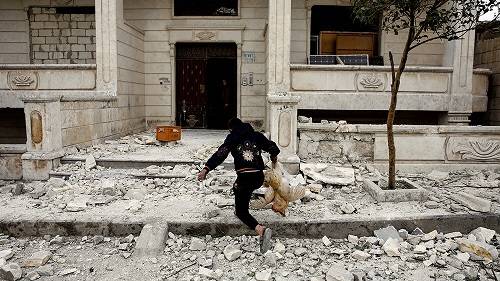