Having good expectations of Allah: An act of worship and key to happiness 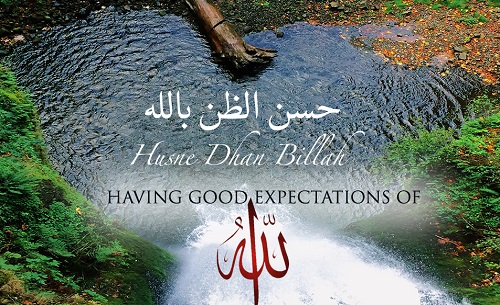 Having good expectations of Allah, the Exalted, is a great act of worship that a believer should fill his heart with in all his states and throughout his life. He should evoke his good expectations of Allah with regard to receiving guidance and Rizq (provision) and whenever he hopes for the righteousness of his offspring, the acceptance of his supplications, the forgiveness of his sins, and in all his affairs. Despite all adverse circumstances, as a believer, he should never give up optimism.

said: “By Allah, a believer is not endowed with a better blessing than having good expectations of Allah. By Allah, no person expects good of Him except that He gives him what he expected; for all good lies in His Hand.” [Ibn Abi Ad-Dunya]

It is amazing that a believer's mind-set; how wonderful it is to have good expectations of Allah and be certain that his heartbreak will be healed, his hardship will be relieved, his toil will be succeeded by comfort, his tears will be replaced with smiles, his sickness will be followed by recovery, and that after the worldly life comes to an end, there will be Paradise as wide as the heavens and the earth, prepared for the righteous.

An Arab poet said (what means):

“Say to the one whose heart is filled with pessimism

Who goes around narrowing the horizons around us

The secret of happiness is having good expectation of the One

Who created life and divided Rizq among the creation”

said in a Qudsi Hadeeth (sacred narration): “Allah, the Exalted, Says, ‘I am as my slave expects me to be.’” When a person expects good of Allah, He showers him with His abundant blessings and generous bounties. When he believes with certainty that Allah intends good for him, Allah will bestow upon him of His blessings what is beyond his imagination. Allah, the Exalted, treats His slaves in accordance with their expectations of Him and grants them what they expect of Him and much more.

Another Arab poet said (what means):

“If distress grows more severe, the door to Allah is wide open

The one who returns to Allah will never fail

Whenever you are overwhelmed with distress, say ‘O Merciful Lord,’

He will relieve your distress and bless you with rewards

Always have good expectations of The Most Generous

And His Grace will indeed amaze you”

Al-Ma‘moon said to Muhammad Ibn ‘Abbad: “I was informed that you show hospitality to all the visitors of Basra!” He responded: “Withholding generosity implies having bad expectations of Allah.” Another version of his response reads: “He who has a rich master (i.e. Allah) can never become poor!”

Times when having good expectations of Allah is further emphasized

First: During times of all crises, such as poverty, debts, diseases, mental stresss and and nervousness due to the overwhelming Fitna (temptations)

said: “Whoever is afflicted with destitution and refers it to Allah (i.e. beseeches Him for relief), Allah will grant him provision sooner or later.” [Imam Abu Dawood, Imam At-Tirmithi, and Imam Al-Hakim]

The Quran mentions the state of the Prophets when harsh adversities befell them; they had good expectations of their Lord with certitude and trust in His promise. Their actions were based on firm conviction rather than passing thoughts. An example for this is the response of Moosa (Moses)

to his people when they said the words of disappointment at a time of a hardship. Allah Says (what means): {…“Indeed, we are to be overtaken!” * [Moosa] said, “No! Indeed, with me is my Lord; He will guide me.” * Then, We inspired to Moosa, "Strike with your staff the sea,” and it parted, and each portion was like a great towering mountain} [Quran 26:61-63] Another example is what Muhammad

when his enemies were standing by the entrance of the cave (where they were hiding) Allah Says (what means): {Do not grieve; indeed, Allah is with us.} [Quran 9:40]. He,

, said to his Companion: “O Abu Bakr! What do you think of two (persons) the third of whom is Allah?”

Here are the words of another Arab poet (what means):

“Expect the doings of your Lord to come

With what you wish for of prompt relief

And do not despair when calamity befalls

When a person isdevoted to supplication, no matter how harsh the calamities that befall him may be, he is never overwhelmed by them and is always guided to find ways out of them. His affairs are facilitated and all his efforts are blessed with success. The Prophet

said: “Surely, the one who supplicates (Allah) will never be destroyed (i.e. will never lose).” [Al-Hakim in Al-Mustadrak] Another Hadeeth reads: “Call upon Allah while being certain of being answered.” [Imam At-Tirmithi]

Third: at the time of repentane

A Muslim should be confident in the vastness of the Mercy of Allah and that He accepts the repentance of His slaves and pardons their bad deeds.

on the Day of ‘Arafah and asked him: “Who among the people is in the worst condition on this day?” He answered: “The ones who think that Allah will not forgive them.” This is because doubting His Forgiveness constitutes having ill expectations of Allah, The All-Forgiving, Whose vast Mercy encompasses all things.

Fourth: during the agony of death

said: “Let none of you die except while he has good expectations of Allah.” [Imam Muslim]

said: “They liked reminding a dying person of his good deeds so that he would have good expectations of his Lord.”

A Bedouin fell ill and the doctor said to him: “You are dying.” He said: “And where will I go next?” The doctor said: “To (meet) Allah!” The Bedouin said: “Why would I dislike going to the One Who Alone is the source of all good things?”

A dying man was asked: “What do you think Allah will do to you?” He said: “He has honored me in my abode (the worldly life), so He will not honor me any less when I am in His Abode .”

: “Who will hold people accountable on the Day of Judgment?” He replied: “Allah.” The Bedouin said: “By the Lord of the Ka‘bah, I have been saved! When the Most Generous is in a position to punish, He shows mercy, and when He brings to account, He pardons.”

said, warning and explaining the difference between having good expectations of Allah and being tempted and deluded by the worldly life: “There are people whose confidence in forgiveness diverts them from performing good deeds, , so much so that they die without having a single good deed. . They proclaim: ‘we have good expectation of Allah’. Surely, they are liars, for if they had good expectations [of Him], they would have done good [to support their claim].”

Let's go again through the words of an Arab poet:  (what means):

“Contemplate life and you will notice things and marvel at how they went down How many were the anguishes that made eyes weep, but when Allah, The Most Generous, alleviated them for us, they became easy to bear

And how many were the needs that seemed like a mirage, but when Allah willed it, they became attainable

How much bitterness have we tasted, but it faded away despite the harshness of lifeThis is the way of the world; if you adorn it with patience, it becomes adorned with prosperity”

Oh Allah, bless us with having good expectations of You, showing genuine reliance on You, and relishing the sweetness of acknowledging our need of You.

Hope – the Most Sublime Rank for the Followers